Pete had been in touch with the club about doing some caving with us and with a week off work I was happy to oblige so we arranged a trip to Busman’s Holiday via the Ogof Cnwc entrance to Daren Cilau.

We met up in the Daren car park but Pete soon realised that he’d grabbed the wrong helmet as the one in his boot was tiny and didn’t come close to fitting him. I tried it and thought I could just about get away with it but then there didn’t seem to be any way of attaching a lamp so we were still a little stuffed. The only thing for it was to drive to mine to pick up my spare lamp/helmet and back, which was going to take the best part of an hour and a half. We jumped in Pete’s car and pulled out of the car park onto the Hafod road but had to immediately reverse up for a minibus full of kids in oversuits, which turned up into the car park.

“I wonder if they’ve got a spare helmet?” I joked.
“Might be worth a try.” replied Pete.
“Isn’t that Vaisey driving?” I asked.
“Do you know him?” asked Pete back and so we drove back into the car park.

Yes, it was Vaisey Bramley, leading a group from the Gilwern Outdoor Education Centre, yes they did have one spare helmet and lamp with them and yes we could borrow it! Thanks again Vaisey, you are a life saver!

We arranged how we were going to return the helmet and headed up to cave, which Pete hadn’t been in before. The first part of the cave was muddy as usual but with all the recent rain, it was wetter than I’d seen it before, with more lovely puddles to crawl through. The first 15 minutes or so of the trip aren’t the most pleasant, with the muddy and gravelly crawls but suddenly popping out into the huge and well decorated Price’s Prophecy chamber is a great experience. 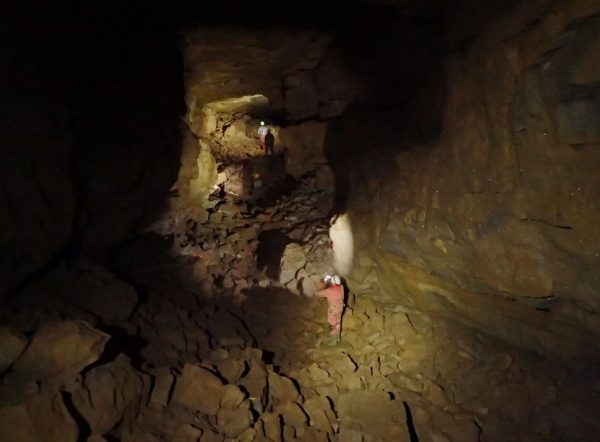 First we headed North, through another decorated chamber with a noisy inlet stream and then into larger, bouldery passage, with not much in the way of formations but a bat or two here and there. At the end of the big passage is a longish but easy crawl, that leads into the most Northerly section of Busman’s. We soon arrived at the original breakthrough point, up from Antler Passage, where we stopped for a quick bite to eat. 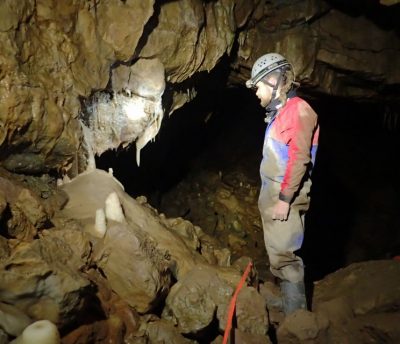 Formations on the edge of Price’s Prophecy chamber 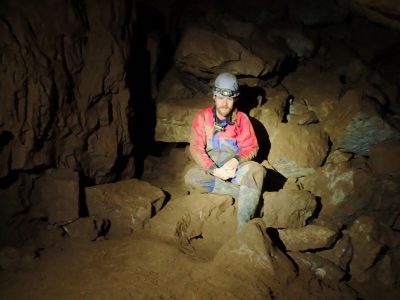 On the way back I took a few photos and pointed out some of this newfangled Cryogenic Stal on the floor of the big passage. A check of the watch back at Price’s Prophecy showed we still had time to have a look at the southerly section of Busman’s. We wanted to time it so we’d get back to the car park a little bit before the group from the Gilwern Centre were due. The passage to the South is smaller than to the North and we soon reached a corkscrew dig up through boulders, quickly followed by another crawl through a dig. We then entered another large section of the passage at Stal Boss Chamber. There is a smaller rift passage to the right here, which we had a look down as it’s a bit of a change from the large, bouldery passages we’d been in so far. After taking photo’s in the decorated chamber, we started out. While crawling out I realised I’d only taken photos in the big passages. Looking ahead, Pete was in a nice small section so I called out about taking a photo there and asked if he was in a dry spot. Getting a very resounding NO! in reply, I didn’t push it further and we carried on out! 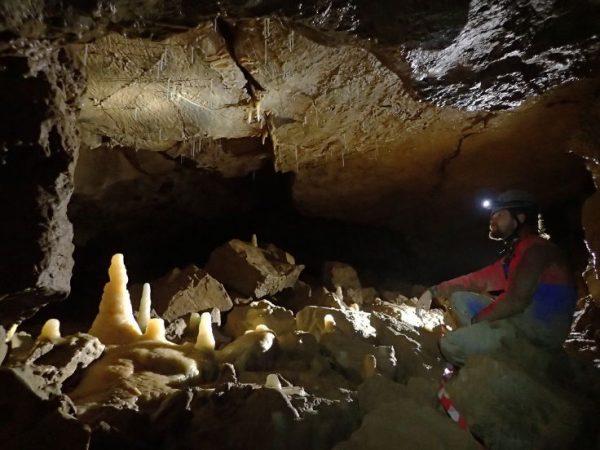 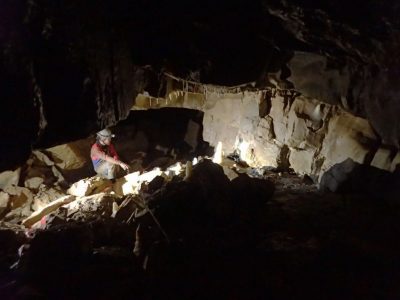 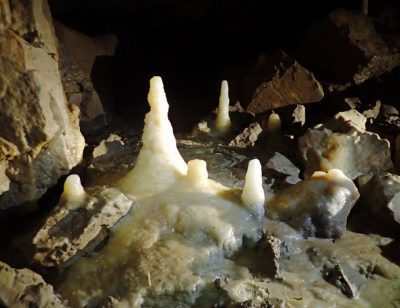 Roughly three hours underground in all, an enjoyable shortish trip into some impressive passage, rounded off with a nice pint in Llangattock.

Early start for this one as we had wanted leave a lot of time for route finding, with a belly full of bacon sarnies I set off for , The weather being a bit too nice for the 500m plus of crawling about to ensue. As I get to Abergavenny Tom texts to say his car key is in the washing machine so there will be a slight delay!
We meet in the car park and discuss whether maybe getting a key to OFD would be a more sensible option or even a wander in Dan Yr Ogof showcave. But after a nice cup of “Man Up” we find ourselves at the start of the entrance crawl. 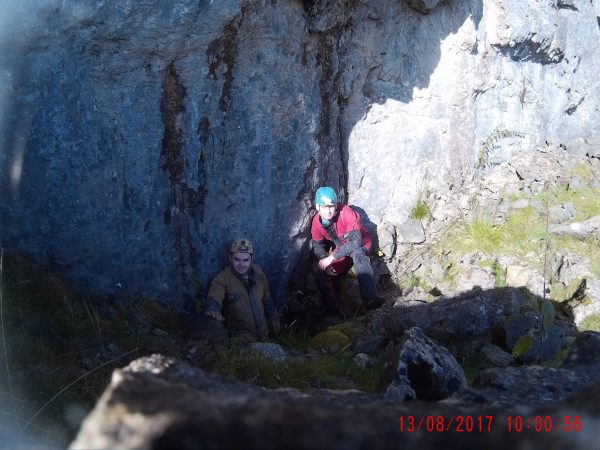 Trig and Tom at The Entrance

Slithering into the icy waters the swear words could have probably be heard in Aggy but once we both negotiated The Vice the going eased off and normal conversation was had and pictures taken and plenty of “not as bad as I remember” remarks were said. We cleared the entrance in about an hour, stopping only for a drink and a couple of snaps. 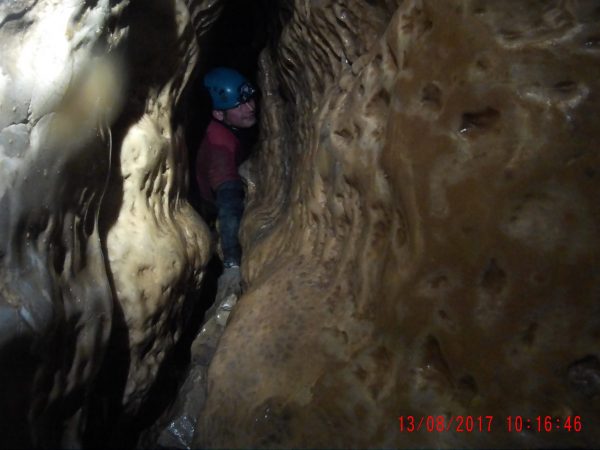 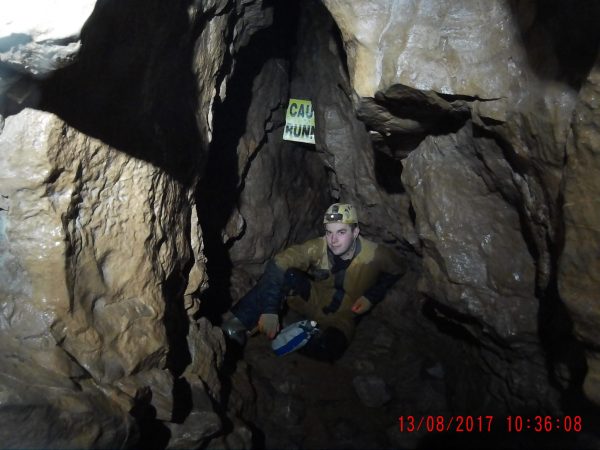 Tom in the Entrance Series 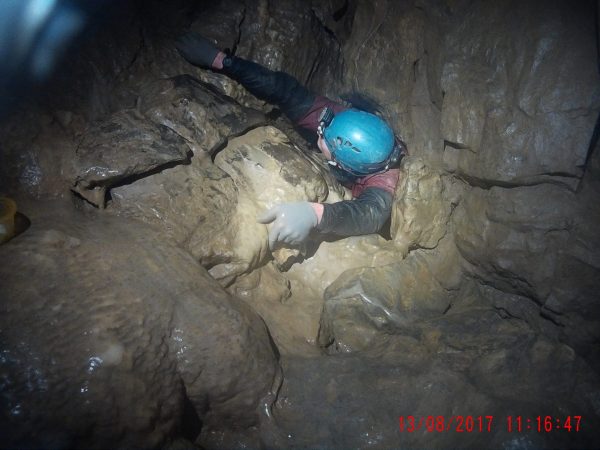 One thing that annoys me about Daren is how the entrance just stops and you are suddenly in walking passage! God send really. We didn’t hang about and pressed on, Tom hadn’t seen the crystal pool before so we decided to go and have a quick look in there before Jigsaw, as its pretty much en route. Worth noting this part of the cave is quite easy for navigating as there are handy reflectors pointing you in the direction of Jigsaw Passage and vice versa for the Entrance/Exit. After a picture of the dried up Crystal Pool we pushed on into Jigsaw Passage and through The Wriggle. 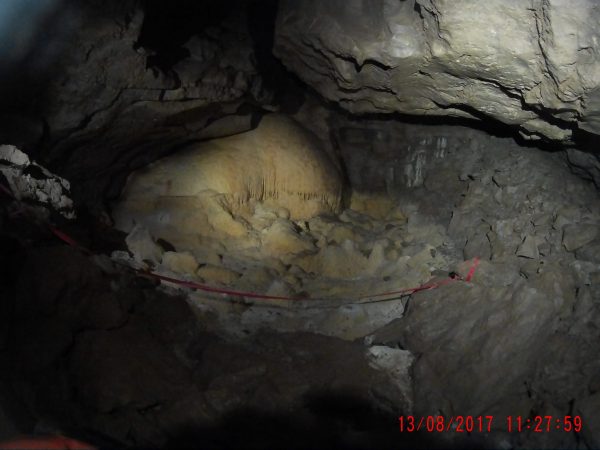 Arriving at the logbook in ‘Big Chamber Nowhere Near The Entrance’ we signed the log book and consulted the survey. We both had been in the cave both and Tom had done the route before, but in reverse and we all know how different caves look in the opposite direction so this was going to be a good old fashioned survey and description following kind of trip. We carried on as per description but took several attempts and a compass reading! to find ‘Epocalypse Way’

Now this is when I started to realise what an amazing place this is, as after only a few minutes in the easy going walking chamber on the left hand side in the far distance something catches your eye…..a pure white glow. The pace increases to reach the famous formation of ‘White Company’. Can easily say it was breath taking and well worth the few hours of caving to reach such an epic. We stayed here for a short while taking pictures and having a rest and generally taking in such a sight for sore eyes. 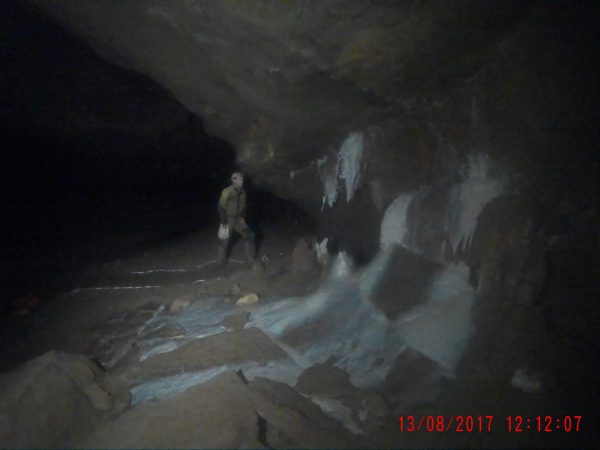 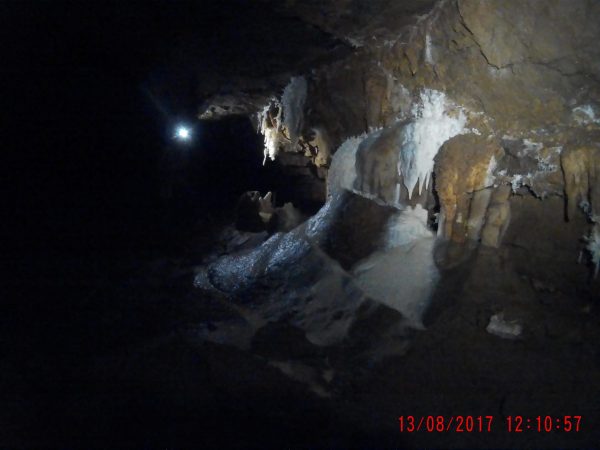 Continuing on still impressed with White Company we are rewarded once again with a short climb into a very very very well decorated oxbow, ‘Urchin Oxbow’ to be exact with its deposits and crystal lined roof and yet again another reason to side-track from the planned route. Just round the corner from Urchin the aptly named ‘Kitchen’ is found, where we stopped for lunch and refilled water bottles with some of Llangatwgs finest council pop.

Trig in Entrance to Urchin Oxbow 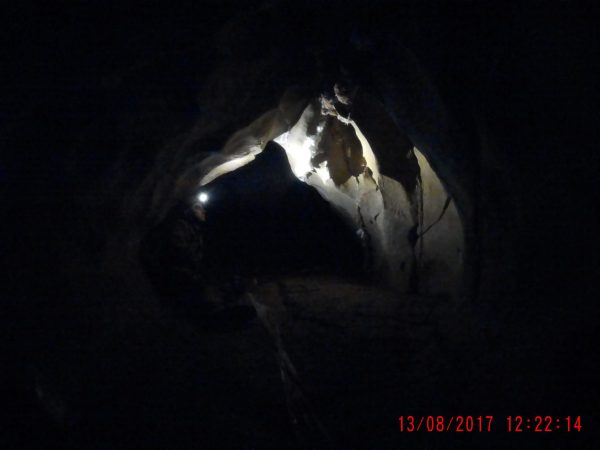 Now turning left and then left again we appeared in ‘Antler Passage’ and yet again the cave reveals another one of its secrets in the form of a gorgeous set of Helictites named ‘The Antlers’ (for obvious reasons). Now here comes (in my opinion!) the hardest part of the trip. Antler Passage is long….really long and its 99.8% boulder hopping up and down boulder slopes of which this mountain and its systems are famous for with the remaining 0.2% being awkward small pitches with ladders and lines in situ with one being rather tight at the top where I managed to sub humanly bend my knee in un-godly directions. Its easily to navigate funnily enough as its one long passage with ‘Man in the Roof’ dropping back into the passage at one point. But it does eventually end in the form of a lovely wet boulder choke and another climb……..decent. 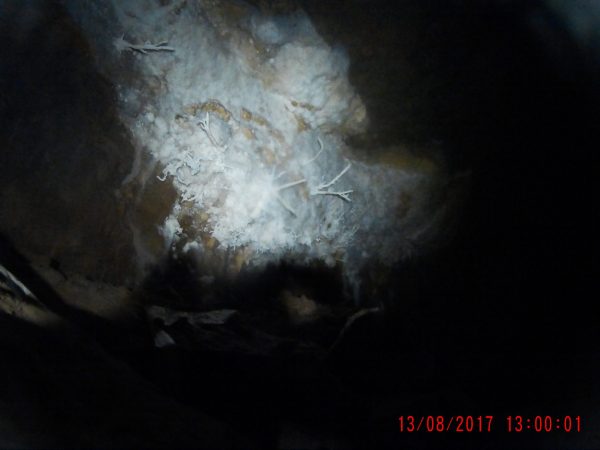 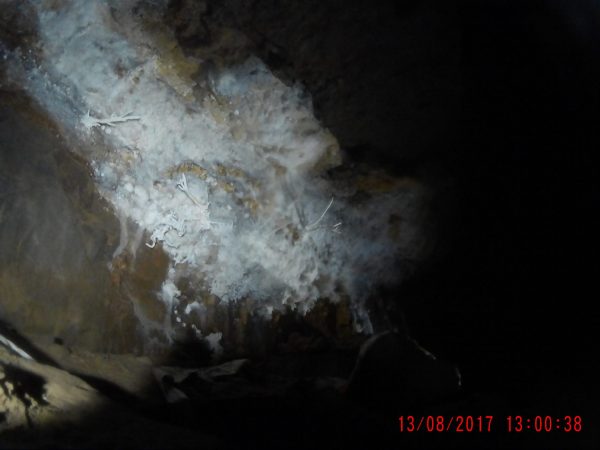 Popping out into ‘Busman’s Holiday’ here our survey improved somewhat and route finding was relatively easy until we reached ‘Prices Prophecy’ which is an amazing, well decorated chamber where the way on looks to the right ( I have previously read about some guys a few years previous who took this route and never found the connection with Cnwc and had to turn back and travel the full 4-5hours back through Daren!) but is actually off to the left into a further decorated chamber and low behold a helpful sign reading “Cwnc exit this way!” too easy!
What else can I say about Cnwc…it’s a dig, it’s not hard but it certainly isn’t pleasant but certainly beats having to go all the way back. We exit covered in mud but high, very high spirits into the warm summers day. Back in the car park we entertain some holiday makers with our tales of crawls and endless passages much to their amusement.
Definitely one of my favourite caves and trips of all times and I think Tom would agree!
5ish hours. 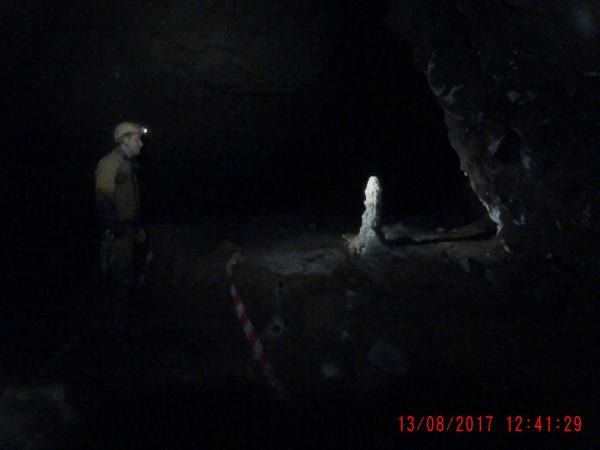