We made our way in to Cairn Junction via Darling Rifts and the original Pitch Bypass and then to Tea Junction via Wonder Bra. Here we turned left up White Arch Passage and soon found Back Passage in the right hand wall. Back Passage is a 200 foot long flat out crawl! And when I say flat out, I mean flat out – there are only a couple of places where it is high enough not to have your head turned on it’s side. 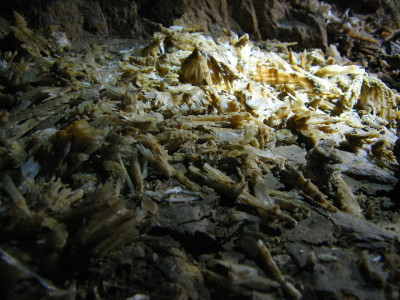 Eventually we got out into the larger Crystal Cruncher which is mostly hands and knees crawling in a wide passage. It has a dry, cracked mud floor with lots of crystals growing on it, hence the name. In fact there are lots of crystals everywhere, on boulders, on the walls and on the ceiling. After a couple of hundred metres, it enlarges to stooping height, before another short crawl leads into The Score. This starts off crawling but soon enlarges to a lovely big, impressive passage. There are still loads of crystals everywhere. We soon passed Oo Crawl, on the right, which is an even longer crawl than Back Passage and connects into the roof of the main stream way. Oo Crawl is taped off to protect the very vunerable crystals on the walls of the narrow passage. The crystals in The Score are just as good and a lot less vunerable so Oo Crawl is best left alone. 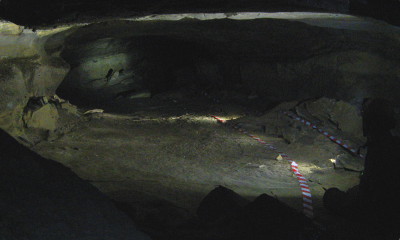 The Score (not the biggest bit)

We made our way along The Score, which involves a couple of short crawls, to where it ends at a cross rift. To the left just goes a short distance (only a 100m of digging here would connect to Crystal Mole Passage and create a Short Round Trip!), while to the right, a longer passage leads via a very tight and committing squeeze, to a low section of passage that has some pure white straws/thin columns with helectites growing off them and a stunning formation called the White Wormary. 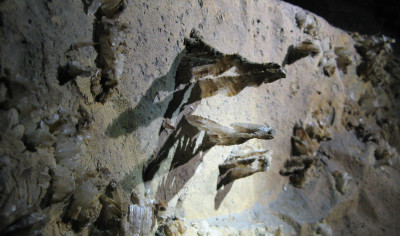 We had a bite to eat and as we packed away ready to head out, Huw D spotted a bat on the wall not too far away from us. This is a long way from the surface. We headed back up The Score where I took some photos of the passage and crystals. It’s interesting to note that as we now headed North, we were actually heading downstream in this passage. The major streams in the cave now flow South to resurge at Pontnewynydd but in the past, the water flowed North to resurge in the Clydach Gorge. The Score and Crystal Cruncher were part of the main drain flowing North to the Clydach. 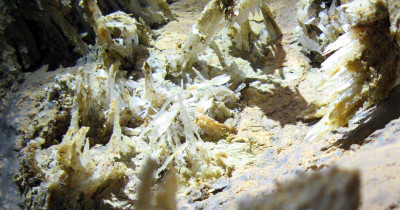 Of course to get out, we had to do Back Passage again. Huw D went first and took 15 minutes to crawl through, I took 30! I really noticed how steep the climb out from Cairn Junction to the surface is and was pretty tired by the time we got out.