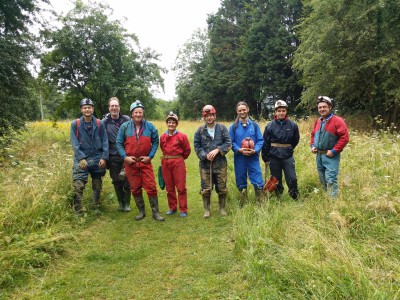 Barry and I decided we’d really like to visit the Box Freestone Mines near Bath in Wiltshire. We’d read about the 90km of passages and seen some great photos of the place on the web.(My photos don’t do it justice!) Stone has been quarried here since Roman times and the mine only closed in the 1970’s. Freestone means that the rock does not have beds as such and can be cut easily to any size. This was almost entirely done by hand, with the stone being soft enough to saw. The stone was used to build the famous Bath crescents, among other things. Parts of the mines were taken over by the MOD in the early 20th century. They still use vast areas but have abandoned other parts which we were able to visit.

The mine is a complete maze, with junctions every few metres. For this reason I made contact with a guy called Dave, from the Bristol and District Caving Club, via the UkCaving forum. I’d noticed he’d posted a few Box trip reports, as well as reports of trips to Aggy and Draenen. I asked if he would guide a trip for us in return for a guided trip into into one of the Welsh caves. He kindly agreed and got a couple of his club mates involved. One of them, Mark, lives in Box village and knows the place like the back of his hand. They also knew all about the mines history, the artifacts and tools left by the miners and the techniques they used, which added a lot of interest to the trip.

Approaching the Back Door entrance. Photo-Huw

We entered via the Back Door entrance (there are only two entrances in general use) and with Mark knowing the place so well, we didn’t have to stick to the main passages and used many short cuts through smaller passages. This enabled us to cover a LOT of ground and see many more of the sights than is usual on a single trip. The mine is normally thought of in three sections, the Northern, Central and Southern areas and it’s more usual for a trip to be into just one of these areas. With Dave leading and setting a good pace, we covered parts of all three areas. It’s not all walking, as some of the shortcut routes involve crawling over deads (waste stone) or collapses. Something we saw a lot of was graffiti drawn by the original miners and we made many stops to examine it. The graffiti covered many subjects from people (sometimes boxing) to trains, tunnels, calculations, counts of blocks of stone, dates and initials and names.

Examples of the miners grafitti – 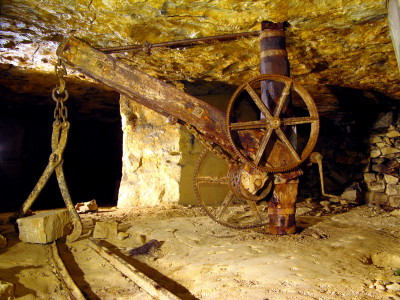 We headed along Cliftworks Passage to the Iron Door, which is the only way into the Northern region of the mine, an area known as Crane Country. This area contains a large number of a type of wooden crane, that are unique to Box. They were used to lift the cut stone blocks onto trucks. Some are still intact, while others have rotted and fallen over. 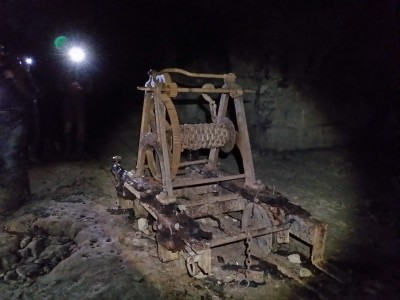 We passed a couple of grilled shafts leading to the surface and had a break at the Crab Winch. We then headed back along Cliftworks Passage which, in this region, sports a number of serious collapses. This means crawling and clambering through short, damp, muddy chokes. It’s just like caving in fact! Most of us were wearing our normal caving gear which we were finding a bit hot and sweaty given that we were travelling at a fair pace. The B&DCC lot were wearing boiler suits, which would have been more comfortable. My mate Dave decided against wearing his caving kit and chose to the clothes he was in instead. This seemed like a good idea until the chokes. 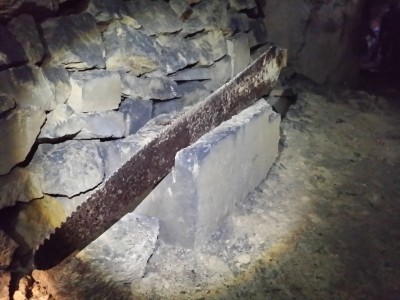 We went back through the Iron Door and headed into the central region of the mine, with our guides Dave, Mark and Simon pointing out and explaining interesting features to us. One of the more common features are the saw benches. These are constructed out of a large, rectangular block of stone with a groove running along the top surface. A blunt saw blade was placed in the groove to hold it while the teeth were sharpened by hand, using triangular section files. We saw many benches, many saws and lots of files. The tools had simply been left where they were on the last day a particular area of the mine was worked. 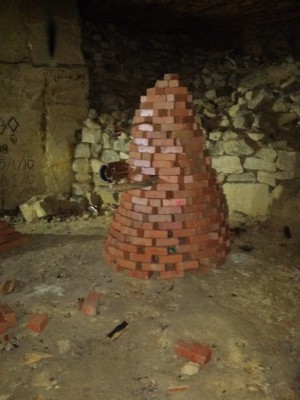 We saw the famous red brick ‘Robots’, built by past explorers. They change every now and then and this time they included a Dalek! We passed the Stone Staircase and the Delta Rectangle Shafts on the way to the MOD section. In this area the passages had been enlarged and extra support installed. Mark took us to the locked Red Door at the end of one of the passages. A large fan could be heard whirring behind it. Apparently there is a data storage facility on the other side of the door. Sometimes, checks are made on the passages on this side and the door is left open for health and safety reasons. Cavers/mine explorers have been in on these occasions and had a look around!

Grill into the MOD area and the Red Door – 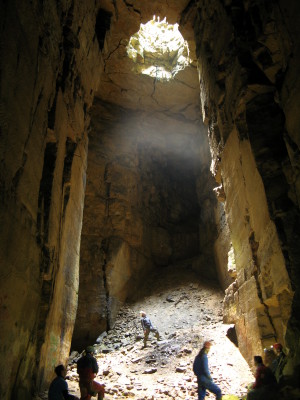 The Cathedral – note the cloud in the shaft! Photo-Huw

Next Mark led us to one of the highlights of any trip to Box, The Cathedral, a large chamber with a daylight shaft. The shaft was used to haul stone to the surface. Another break was had here and photos were taken. We were then given the option of either going straight out via the nearby Back Door entrance or heading for Jack’s Entrance in the Southern region of the mine, which, we were told, would add about an hour to the trip. We opted for Jack’s Entrance as we wanted to make the most of this trip. The route was pretty uneventful apart from meeting a couple of guys (one of whom was sporting a pair of dungarees) on their first trip into the mines. They had used Jack’s Entrance and were heading for The Cathedral so were doing very well. In this area we saw a number of drawings of working horses, done by the miners. There were a couple of pictures of one horse in particular. Unfortunately I can’t remember it’s name. As we approached the entrance, we found that someone had laid a trail of small pieces of red and white marker tape on the floor. Mark was not impressed by this and picked it all up. Didn’t hear any stories on the news about lost or overdue parties in the mines so hopefully this didn’t cause a problem for anyone! 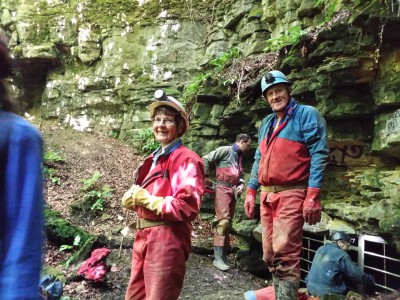 Daylight was regained and after getting back to the cars and changing, we walked to the Quarryman’s Arms, for a pint in their very pleasant beer garden. We thanked our guides and said that they should come caving with us in South Wales sometime soon. Afterwards we said goodbye and headed for home over the bridge. Big thanks go to Barry for driving us all in his huge wagon of a car! 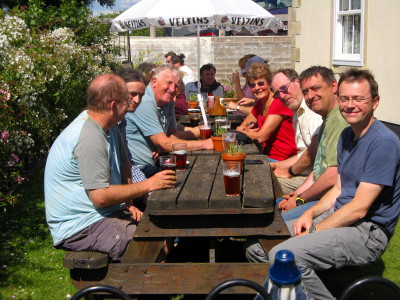 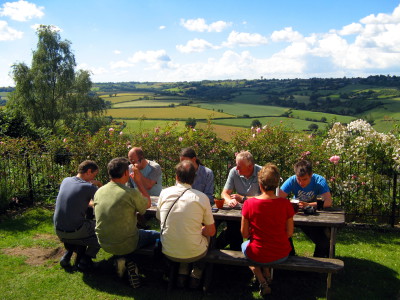