The three of us decided to take advantage of a day off in the week to take a trip into Ogof Draenen. It would be the first time into the system for Lloyd and myself, both of whom are new members, joining the club during 2018. I was looking forward to a different kind of trip to face different, new, challenges. It had been a busy November for me, as a newbie. Two trips into Ogof Craig y Ffynnon (OCAF), the first a short trip to the base of the pitch before the 2nd choke and a more strenuous evening trip to Hall of The Mountain King. I had carried out my usual research, reading about the cave in the guidebook, watching some vlogs on You-Tube, reading some reports around the web and of course the logs here on the Brynmawr Caving Club site. My expectations, or perhaps worries were that of a long climb back out and many boulders to work my way past in various chambers. However, and I don’t mean to sound cheesy, this is just what I was after, something to stretch my novice skills, building stamina and learning new techniques. Oh and enjoying the wonders of the cave in great company.

We met up in Asda Brynmawr, resisting the temptation for a bacon roll and cup of tea. Popped up to town to collect the key and decided that, due to the recent heavy rain fall, that it would be interesting to take a trip down the main streamway, to see it in high water conditions. Of course, I had no idea of knowing what it looks like in low water conditions either, and so long as there was little chance of being swept away, or a flood to the roof, I thought, yeah sound like a great idea. The three of us headed up into the low clouds and parked up in the area, just before The Lamb and Fox. Maybe about this time I should expand on the weather. It was more than just heavy rain on that day, it was one of the named winter storms, Storm Diana. And up on the exposed mountain top parking area, she was giving us a good whipping with her wet, angry wind. Diana ensured that we did not dawdle over getting changed and checking our kit. A reasonably quick change was followed by an equally quick walk off the top and into the relative shelter of the cwm down to the treeline. The men took the opportunity to assist Diana in the watering of the surrounding vegetation before we headed in through the very drafty doorway. Very quickly into the cave, I encountered my first real challenge, something that even the second choke in OCAF did not provide, finding that my hips do not always fit where my legs do. A shuffle over to the left and I slid down easily. I think at this point the additional lubrication of the stream cascading down the entrance was more of a help than a hindrance. My memory of the ordering at this point is a little vague, but I clearly remember Huw pointing out some blocks in the passage where the bedding plane crawl is. This was to provide me with some comfort a few hours later. Down the scaffolding climb and we worked our way to the top of the pitch. Whilst many experienced cavers, or perhaps most will climb down using the fixed aids, we took the opportunity for some training. Huw rigged up a ladder and life line and demonstrated the caving technique for using ladders. I must say that it was a little weird compared to the loft ladder, I felt a bit robotic using my legs for doing the pushing and not pulling with my arms. But the efficiency of the technique really impressed me. If only I could get the hang of pushing myself away from the wall with more elegance, then I would be a happy lady. Ladder training done, we headed down to the Cairn Junction and signed into the logbook.

We then made our way through the crawl and slid down through the hole to the right, better known as Wonderbra Bypass. We initially headed for Gilwern Passage. Upon entering, Huw suggested that Lloyd and I waited where we were so that he could make his way swiftly to the end of the line of sight, where he turned around and waited for us to join him. Had we had the benefit of Barry’s Sun in a Stick Fenix handheld lamp we probably would have been able to appreciate the length of this part. But as we just had our regular lamps, Huw, quite rightly suggested that the best way to appreciate the scale is for him to head down and us to watch, in appreciation of the size of this relatively tiny part of the system. Passing some pretties on the way, we went as far as the elbow, where a cascade came down from the right hand ceiling. I don’t know if this is a wet weather only or a regular cascade. Good excuse to break out the camera allowing Lloyd and myself to position ourselves for pictures. 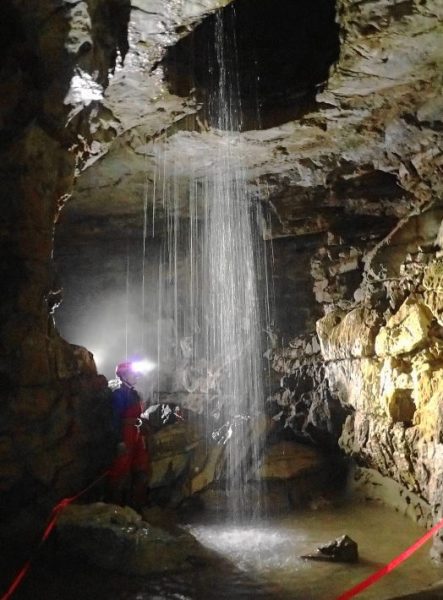 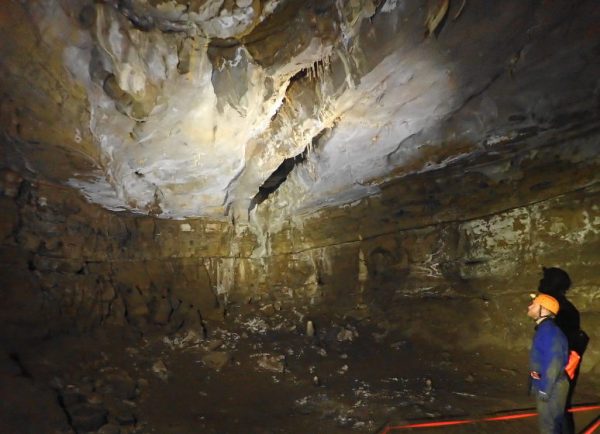 The silver ceiling in Gilwern Passage

Back to Tea Junction and on towards the streamway. As I have mentioned we wanted to see the stream in heavy flow as a result of all the rain. We were not disappointed. My only other experience of significant and sustained stream passage was my taster trip into OFD1. I must say that on this occasion, for me, it was a much greater challenge. Far more concentration was required and there were some parts of wading that made the lads raise their voices due to the water depth making itself know to their bodyparts. Huw selected a suitably pretty or maybe a suitably deep pool after a small cascade for some pictures. Lloyd being a really good sport for standing in deep and fast water whilst Huw and myself carried out the necessities with camera and lamp respectively for some more pictures. We passed what I called to myself Blorenge Beach on the left, a pretty but small sandy cwtch in a bend. Progress was made relatively simply to the first boulder choke, which being our destination was the point of turning around. On the way back up, I was able to get a better appreciation of some of the impressive formations and the height of parts of this area of the streamway. A few more pictures were taken, for example of a chunky Stal apparently named, “The Sentinel” that stood impressively
on a raised step to the left. Moving back upstream had a feeling of going up the down escalator. Especially in the narrower parts where the current was faster and stream deeper. By this point, my caving stamina was being tested with each cascade climb seeming to become progressively more thigh burning. Thank heavens for my regular walks up onto the mountains as without it I think that I would have been wanting to keep resting. But on we went and progressed one boot in front of the other, back to Tea Junction. 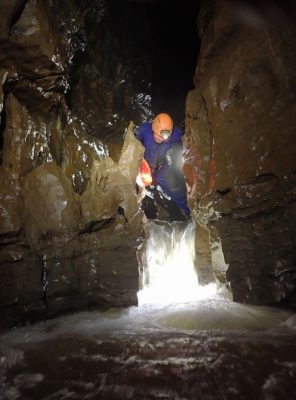 Cascade in the Main Streamway 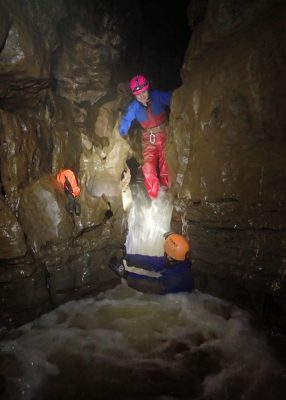 High water in the Main Streamway 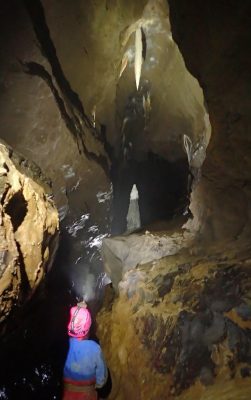 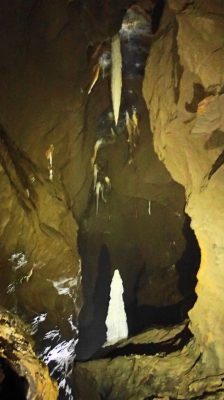 We stopped for a break here and much-needed energy replenishment to prepare us for the climb back out. We ate our sandwiches/nuts/chocolate with efficiency but did make time for reflective discussion about the trip so far. We did however continue before the cold had a chance to set in, we were all very wet from the streamway and did not want to become uncomfortable or end up having the cold have an impact on our performance. The return poke up through Wonderbra bypass was quite a challenge, with a well lubricated, steep floor assisting gravity and the cave not wanting to let go of its grip of us. Draenen wanted us to stay for supper. An inelegant thrust was made by me and perhaps my companions to get to the top of the constriction. Perhaps they managed with grace and elegance, but I did not. All out and into the crawl before a last bit of boulder hopping through cairn junction. By the way the log book pencil needs sharpening. The climb up the ladder was with the reassuring lifeline provided by Huw. To be honest I was so grateful for that lifeline as my confidence was a little dented due to the challenge of the trip. Ladder, rope and all the tackle neatly stuffed away oxymoronically into the backpack and I led the way to the climb out. I managed to take a wrong turn and unbeknownst to me, Lloyd, who was following did not see me fork to the right. I headed off to a dead end, I realised when I was in a gravel-bottomed crawl that I knew I did not pass on the way in. I called out but no reply. I could neither see nor hear my companions. I called out a couple more times, as loud as I could manage, having to consciously fight my creeping sense of fear. I had made two mistakes, taking the wrong turning and not noticing that Lloyd was not behind me. And then my novice caving imagination was trying its best to overrule my rational self. With no space to turn, I shuffled myself backwards until I managed to turn myself around and head back to the junction where I had gone wrong. It was only about 5 metres and I looked to the right to see the waterfall coming down from what appeared at distance, to be from nowhere. I approached the waterfall and looked up and could see the correct route out. I shouted once more, but the noise of the water prevented me from hearing any reply. I realised what had happened and made my way up the climb and when I reached the bedding plane crawl, I had the reassuring sight of the blocks that I had remembered noticing on the way in. My mind was still trying its best to scare me, I had visions of my fellow cavers leaving the cave, shutting the gate and heading back to the car, assuming that I had not waited. Of course, I knew that there is no way that this would have happened and in no time, I could see the soles of Huw’s boots and gave a shout out to him, who I think was surprised to see me coming up from behind. Once out my adrenaline rush subsided and then I started to get wobbly legs. Relief at being reunited and laughing at myself. This whole episode probably only lasted about 5-10 minutes, but my sense of timings were greatly slowed down by my mind working overtime.

A quick walk uphill followed and back to the cars. Getting the engine started to warm the car up and breaking into the flask of coffee that was waiting for me in the car boot. It was cold up on the exposed parking area, but more settled than when we got changed before the trip. Family priorities for each of us meant that we did not call into the Talisman for a post trip drink, instead all heading directly home, just beating the rush hour. I must say that I thoroughly enjoyed the trip into Draenen. It was a very different cave and one that I look forward visiting many times in my new caving career.