Dave, Tom and I, have been back to complete the climb in the tall but short rift passage, leading off from the southern end of Fault Chambers in Ogof Draenen, after our first trip there in June. 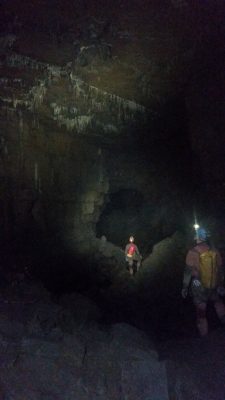 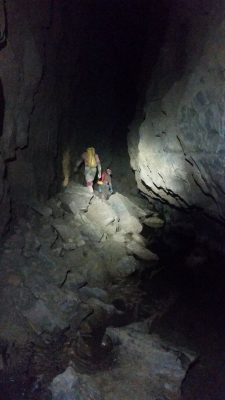 In the time between the trips, we had decided to start again and try to climb to the lower window in the hope that the rock here was better and that there was a passable way up into the higher window, that we had tried to reach last time. 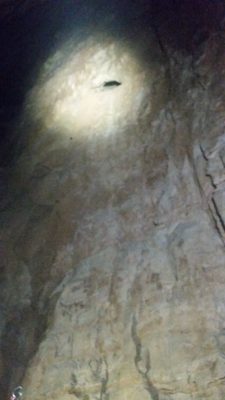 Looking up to the lower window 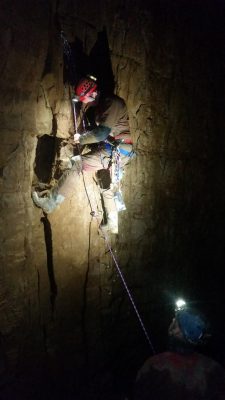 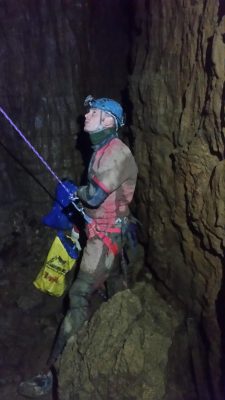 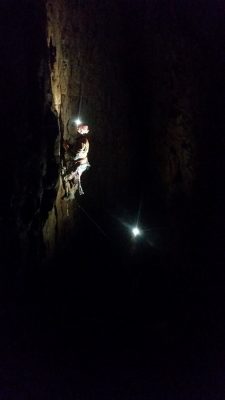 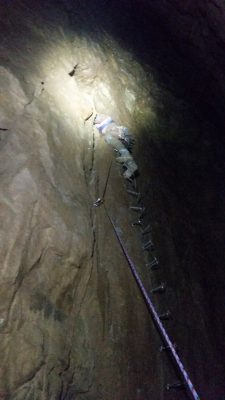 Pulling over the edge into the window

The rock was mostly good and 7 bolts, plus 1 that seemed to go into some sort of pocket in the rock so wasn’t used, saw me gingerly pulling over the edge into the window, on a boulder that was lying on a slope of loose rock. The window was roughly 2 metres wide by 1 metre high but the rift behind it, that I was now standing in, was longer and about 4-5 metres high. To the South was a narrow rift that rose up and turned a corner so that I couldn’t see to a definite end. At the northern end, was a good sized but short rift, rising steeply up to the other window so there was a passable connection between the windows, after all.

I placed another bolt, nice and high in the back wall of the rift, opposite the window, to rig the ladder from so that the other two could join me. The ladder could then also be used to gain the rift rising to the upper window. This turned out to be the final bolt as the drill died as I was placing it! I rigged the lifeline from the bolt and a natural thread off to one side. The 10m ladder turned out to be too short when rigged directly from the bolt so I had to extend the belay with a long sling.

Dave joined me and waited in the narrow rift to the South, while Tom climbed up. I then suggested, that as he was already on the lifeline, he carry on up to the upper window. The ladder was re-rigged directly from the bolt and after a word of protest as he struggled slightly to leave the top of the ladder and establish himself in the rift, he was up in no time. The news from above wasn’t great. The window / ledge up there was larger than the lower one but there was only one small passage going off, which closed down completely after just 4 metres. Tom took a few photos on his phone(!) (I’d left my camera at the bottom of the climb) and then came back down to where Dave and I were waiting. While Tom had been exploring above, Dave had checked out the small rift to the South, which unfortunately went nowhere. I had a quick look at the upper window as well but where I thought I had seen a tube last time, heading upwards from the northern end, there was nothing! I was glad that we had decided to switch windows, as there was a huge amount of small, loose rock, lying at a precarious angle, that would have had to have been climbed over, to gain the upper window directly. 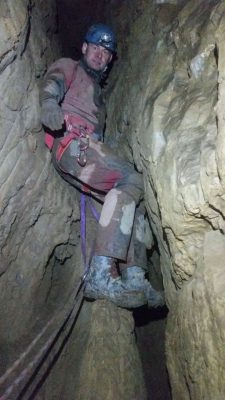 Dave in the southern rift 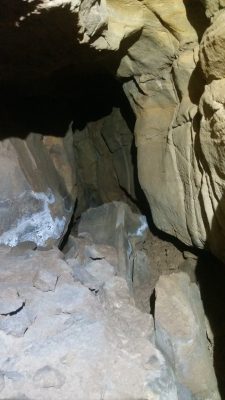 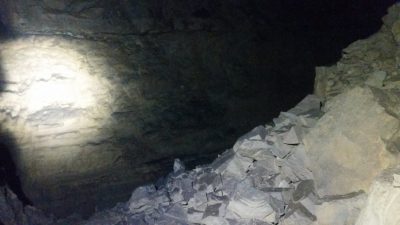 Looking out from the upper window into the big rift

The ladder was re-rigged again from the sling and Tom climbed down. Dave decided he wanted to abseil so borrowed my Stop (to save weight, I was the only one who had brought an SRT kit) and used the lifeline rope. I pulled up the rope, which had my Stop clipped on the end, then carefully de-rigged everything, lowering it all back down on the lifeline rope, before doubling the rope through the ring hanger on the bolt. Only one bolt I know but it was bomber. I then abbed down, retrieving all the gear used on the climb as I went. When we tried to pull the rope down from the bottom, it snagged. Luckily Dave could still reach the other end and pulled it back a little, to try to release it. We tried this a couple of times before myself and Tom ended up sat on our arses, when the rope suddenly released with a stronger pull! 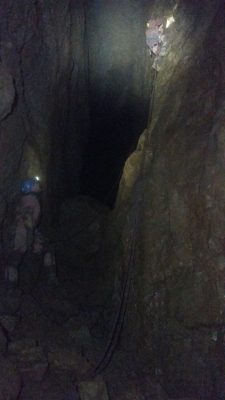 Derigging the rope from the previous climb

While Dave and Tom started packing stuff away, I prusiked up the rope we had left on the other climb last time, to de-rig it, leaving behind another hanger and bolt at our high point. Thankfully the rope was retrieved with no problem, this time. All that was left was to make our way out, carrying a very heavy bag each! 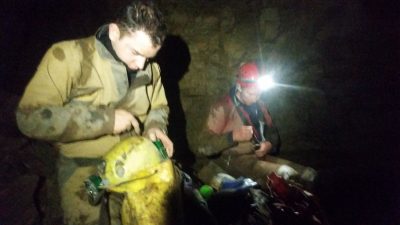 Battery change for Tom and Huw on way out

So no big discoveries! If you include the windows in the total of what we found at the top of the climb, then the passage amounts to about 15m. If you don’t include the windows, as they are open to the main, big rift passage, then you can halve that! Oh well, on to the next lead! We may take a look down a pitch next but there are also some avens and chokes to check out.