So the club have been reminding me of my lack of trip reports, having been on a few cave trips now, and after a gentle Thursday night stroll into Draenen, I feel obliged to write my first.

With my much publicised fear of heights, the plan was to see if I would cry and retreat from the first pitch (“that’s as big as a 4 storey building!”), not far from Cairn junction.

The evening began with Dave picking me up and driving to the car park opposite the Lamb and Fox pub. We started to kit up whilst waiting for Huw to arrive. Huw arrived promptly after us, and together we made our dangerous descent down the steep hill to the gated entrance. On the way Huw told us tales of the initial dig and discovery.

At the entrance, I was lucky to unlock the gate and open the hatch, to be blasted by the incredible draught that departed the unassuming crack in the rock that first drew cavers to dig there.

So, the climb down began. Through a series of flat out crawls, and descents through scaffolded vertical shafts. We emerged into the streamway with much cursing as I received a thorough soaking in the freezing waters. A slot through and under a waterfall brought us down to the initial breakthrough. More tales from Huw about the night the breakthrough occurred. In front of us the ‘Darling Rifts’ continued, while the easy way on was through a crawl in the floor to the right. Of course, Huw wanted us to have the original experience the first discoverers had, so we proceeded through the ‘Darling Rifts’. “Oh darling!”, I was very apprehensive and did not look down, the whole time wondering why we didn’t just go the easy way. At the end of a rift, we climbed down to the left and emerged in a big chamber with a boulder as big as Australia blocking the way on. A climb under the boulder brought us to a huge hole in the floor. The ‘Big Bang Pitch’, the original way on into the cave. After a few more tales, we headed into the Gyracanthus Loop and Psammodus Passage, to see amazing fossils of sharks and Jurassic sea life.

We headed back into the rifts, as I was not feeling the ‘Big Bang Pitch’ tonight (maybe next time…), to emerge back into the entrance series, and continue the ‘easy way’ into the cave. After some more cascades and crawls we emerged on to the top of the 4 storey pitch. To say I was underwhelmed was an understatement. It was a 4m climb down with a knotted hand line. So, I tightened my belt, and followed Dave down the climb, which was no where near as bad as I had scared myself into believing. Feeling like action man at the bottom, I tried not to think about the return climb.

We continued on and headed to the first major chamber, ‘Cairn Junction’, and I signed us into the log book. Job done. Or so I thought. 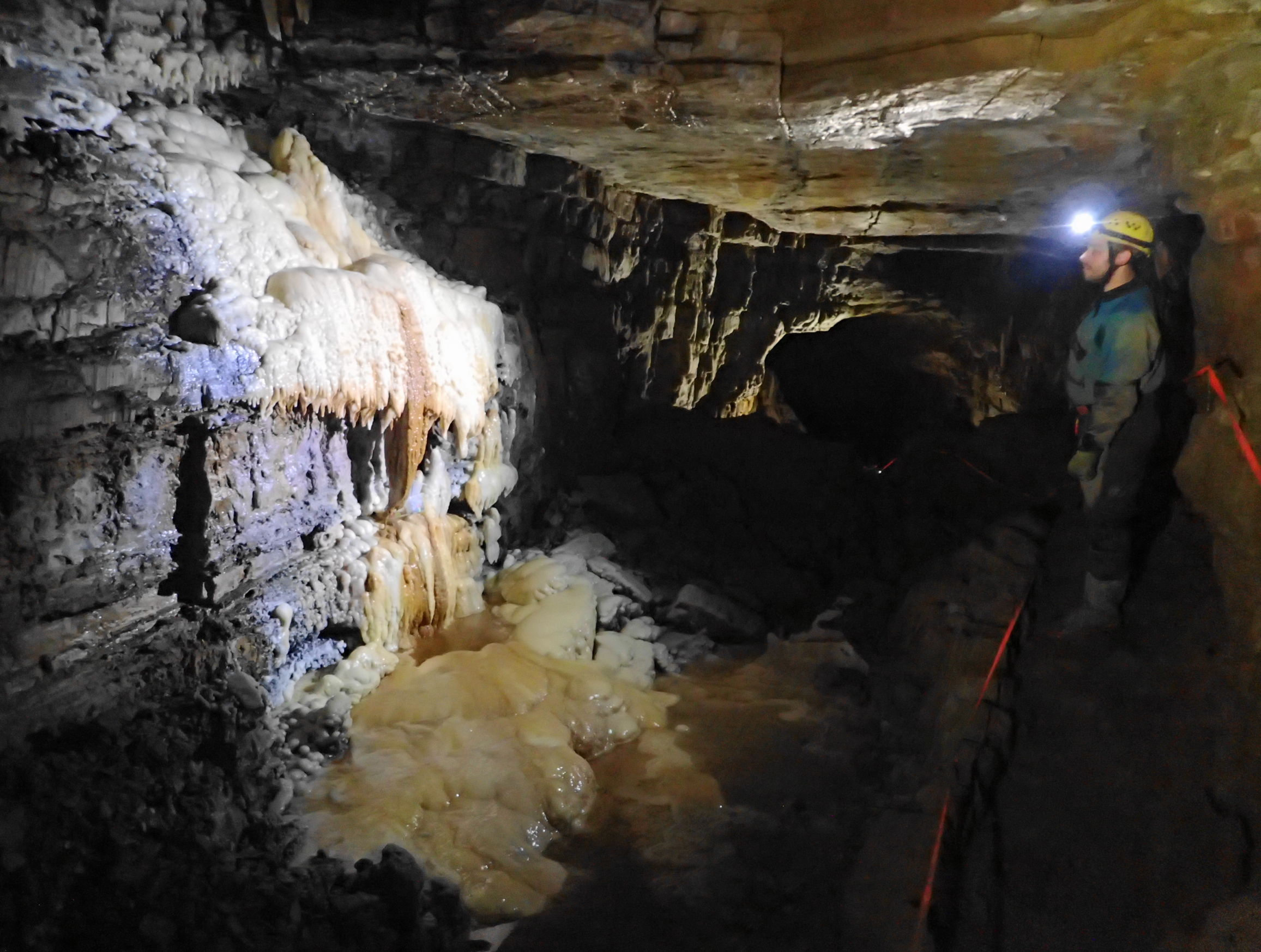 We decided to explore a bit more of the cave. Continuing downstream, through the ‘Wonderbra’, and ‘Tea Junction’, we headed up ‘Gilwern Passage’. I was struggling to stay on my feet for looking at the amazing passage and formations all around, and not at my feet and the path ahead. We stopped for pictures at the bigger formations and decided to turn back at an impressive inlet flowing in from an aven in the roof.
After we arrived back to the junction, we followed the ‘Beyond a Choke Streamway’ downstream. An impressive streamway, with deep pots, and traverses. After what felt like a few miles, Huw reminded me that we weren’t even a quarter of the way to the end of the streamway. With that, we decided to turn back, as it was getting late, and begin the ascent out the cave. 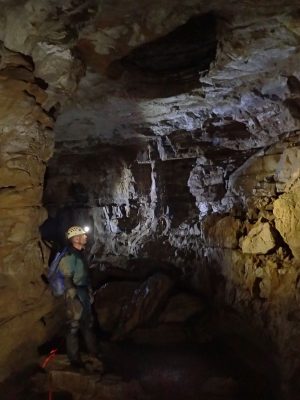 We arrived promptly back at the log book and signed out. We decided to take the easy way back out the cave, instead of ‘Darling Rifts’. At the foot of the 4m pitch, we climbed up with ease, and made our way back into the wet entrance series. I received another soaking at the slot in the waterfall, with the flow going down my neck into my oversuit. After ascending up the scaffolded shafts and through the flat out crawls, we popped out the hatch into the dark, pleasantly fresh, spring night.

We started the dangerous climb back up the steep mountainside, to get back to the cars and change.
A thoroughly enjoyable trip. Although I kept reminding myself that I had barely scratched the surface in Wales’ longest cave system. My lasting thought about Draenen is that it is like climbing a mountain in reverse. When you summit a mountain, the way home is downhill all the way. When you descend into Draenen, the way home is to climb a mountain. 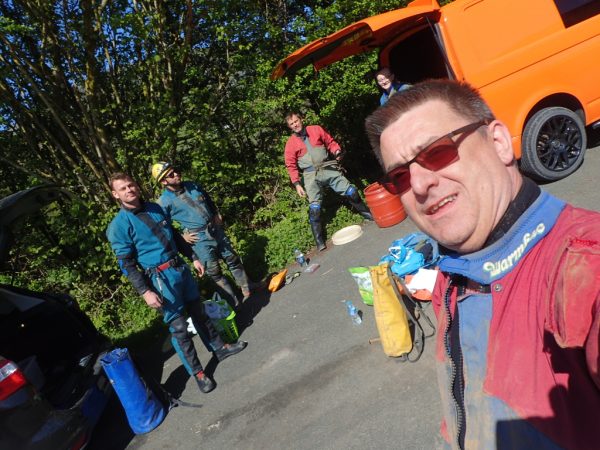 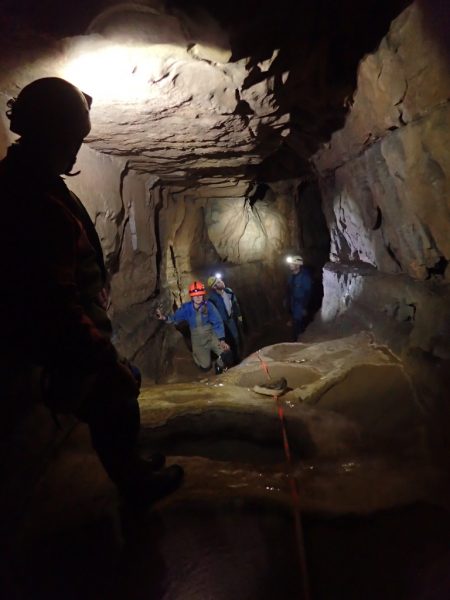 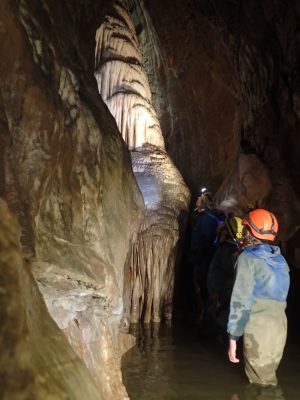 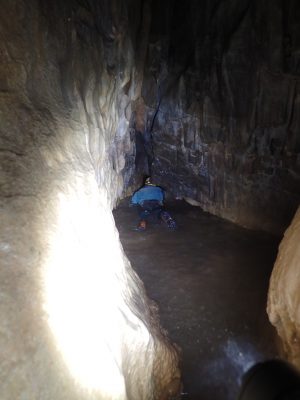 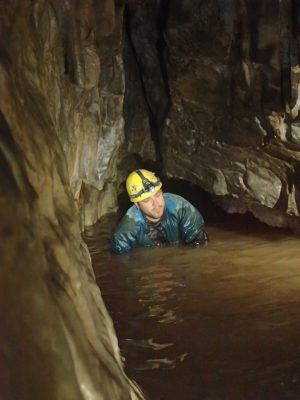 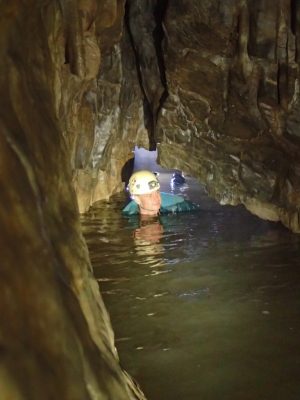 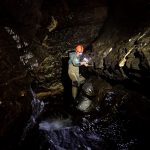 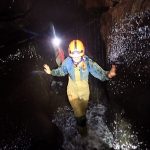 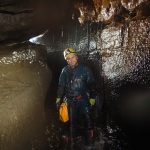 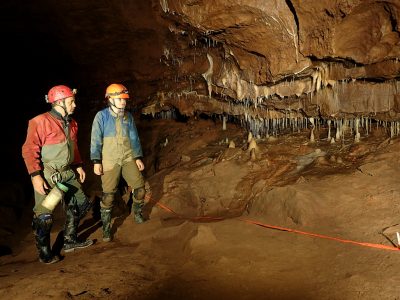 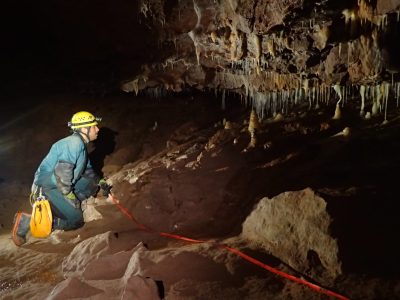 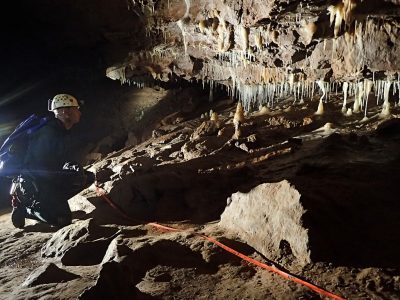 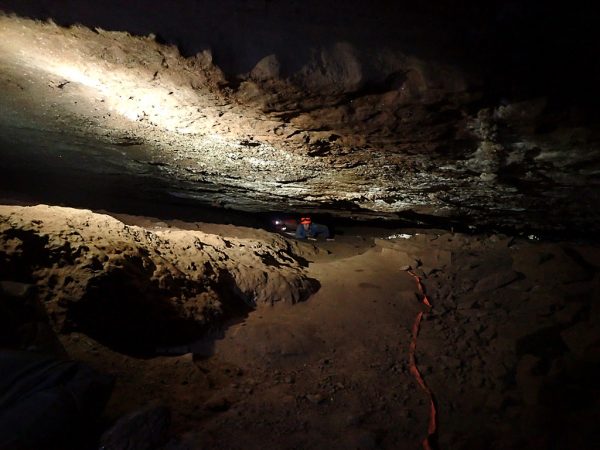 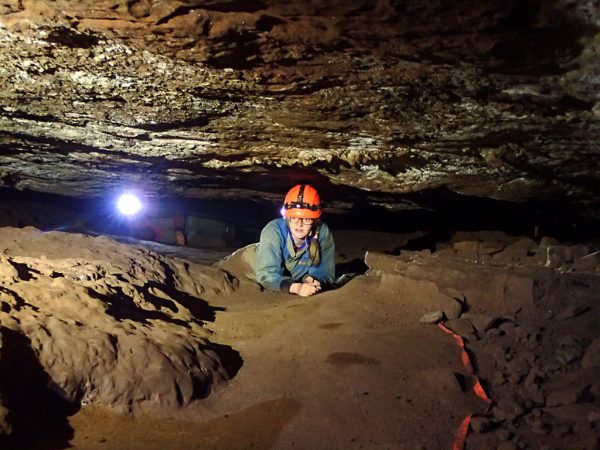 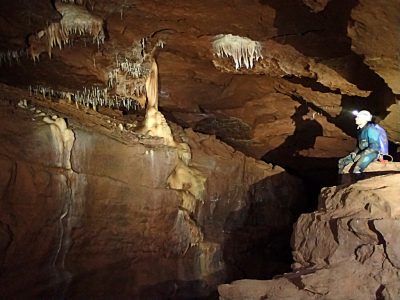 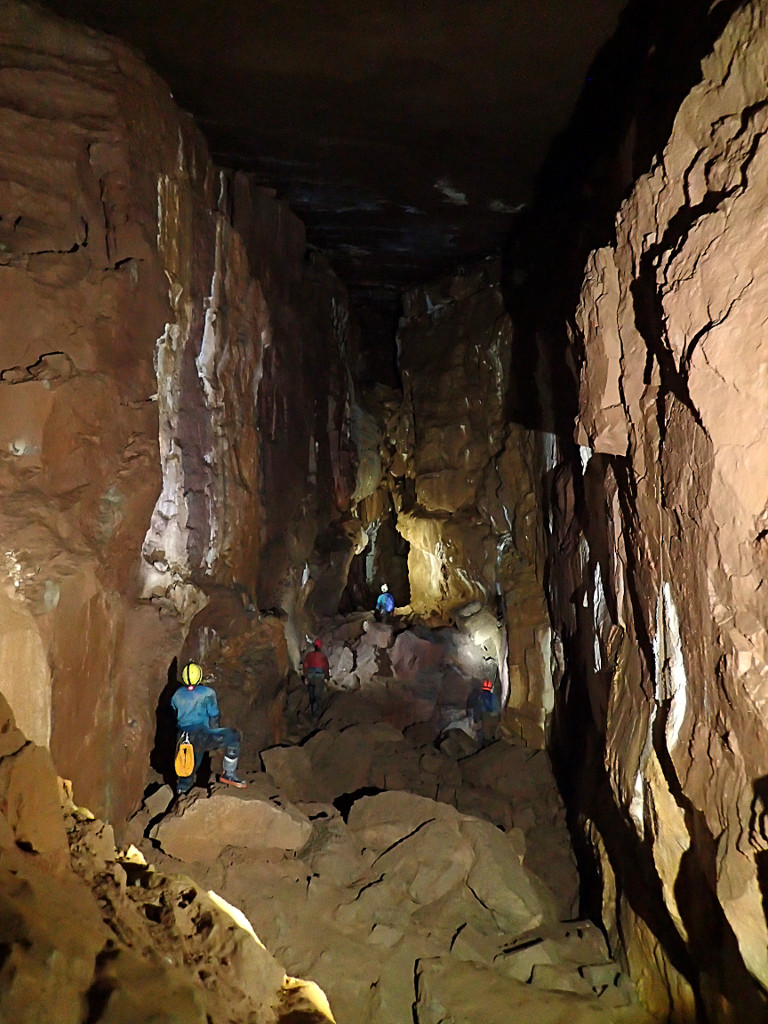 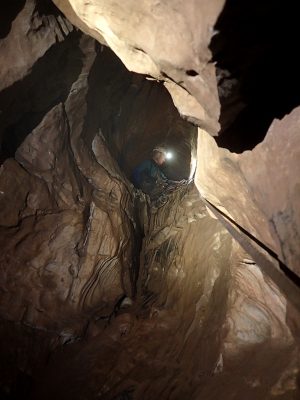 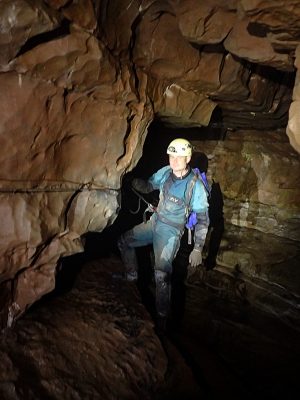 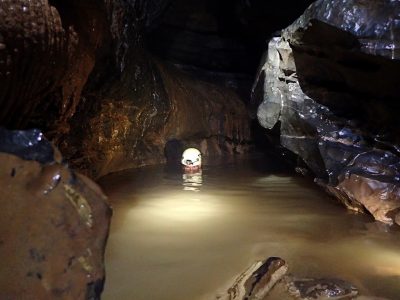