Not sure if the trip was fun or horrid (possibly a bit of both) but there were a couple of slightly worrying incidents! 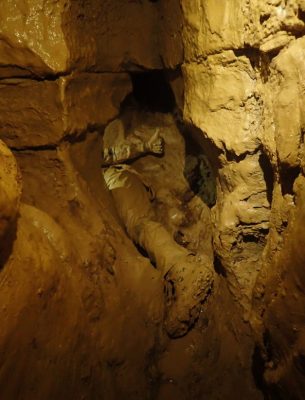 I arrived at the car park near Blaen Onnue Quarry a few minutes early, to find Dave and Tom already there. Everyone was obviously keen! It was a very cold day and the other two wore jackets over their caving gear for some extra warmth. First we headed to the quarry, to check out the film set that’s been there for the last few months. They have been filming a big budget production of Phillip Pullman’s His Dark Materials trilogy, to be shown on BBC1 sometime next year. Filming must be finished as it looked like the set was in the process of being dismantled. 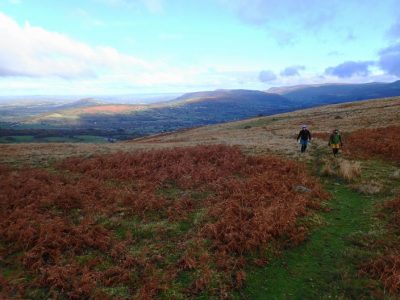 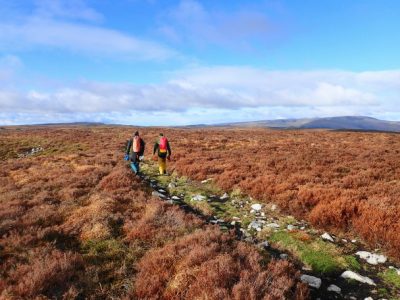 It was a nice, if cold, walk to the cave, accompanied by a bighting wind. Ogof Cynnes translates as Warm Cave and the difference in temperature inside to out was very marked. We’d brought a ladder, mainly to get into the lower part of the Easter Series but first we used it just inside the entrance to take a look down the First Pot. I’d dug here in the early 90s with the Poly of Wales Caving Club. After we’d dug into the Easter Series, at the far end of the Right Hand Series, our survey showed a possible link with the First Pot, which would create a round trip. The bottom of the pot and the dig had become a horrendous quagmire with water lying on top of the liquid mud!

Back up the ladder and quickly derigging it, we carried on just a little way along the entrance rift to Talk Back, which is a very narrow tube/rift and one of the two possible routes on. Tom shimmied through with no problem and the bags were passed to him. Then I tried but I didn’t fit! This was our preferred route all those years ago with the POWCC and the way I took when I did a solo trip to remove some of our digging gear so I was a bit gutted (no pun intended!) that I was too big now. Dave decided that if I didn’t fit, then he wouldn’t either and so our only option was to take the Second Pot route and meet Tom further into the cave. Now the Second Pot has a dodgy chain ladder hanging down it, that probably dates from the 1970s! When we were digging in the cave in the early 90s, we rigged our own ladder on the pitch, if taking this route. Of course, we had a ladder with us but we’d passed it through Talk Back to Tom and so rather than taking up more time, I decided to risk the chain ladder. There had been an aborted BCC/MCC trip to Cynnes a while back and at least a couple of people had climbed the ladder then, before turning around and heading out. It was in poor condition, with the chains loose from the ends of the rungs and slid together in the middle! I slid down the tube to the pitchhead and once on the ladder, pushed the chains apart with my feet. I was nearly at the bottom when a little shock ran through the ladder and looking up, I saw that a chain link on the left, that one of the rungs passed through, had snapped! The rungs below this slopped a bit but I was able to gently climb to the bottom without anything else breaking. Obviously it wasn’t a good idea for Dave to follow me and I didn’t fancy climbing back up the partly broken ladder. By this time, Tom had almost made his way around to where I was. I shouted to him to get our ladder to Dave so that he could rig it on the pitch. That all took a little while of course but eventually we were all in the ridiculously muddy chamber before the choke leading to the Main Chamber, having slid down the infamous Muddy Slot. After all that we hoped the rest of the trip would run more smoothly! 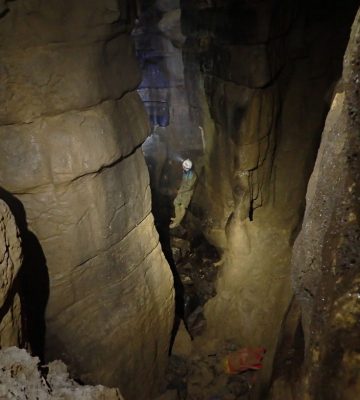 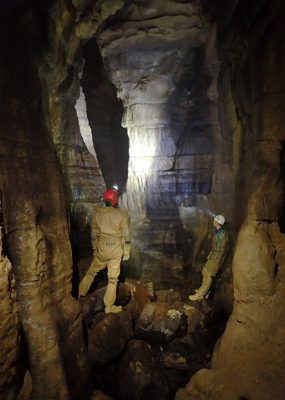 Through the choke and we were into the impressively tall Main Chamber and from there headed into the Left Hand Series. The Left Hand Series isn’t particularly extensive but does contain probably the second largest chamber in the cave, Hope and Glory Chamber. One area I was keen to find, as I hadn’t visited it before, was the Black Hole Series. The way into this turned out to be a very obvious hole through boulders in the base of the chamber. We explored the upper part of the small series and found various places that probably drop into the lower part but as we didn’t now have a ladder, we couldn’t descend. Tom was keen to go back with gear, to take a look at what must be a very little visited area of the cave. 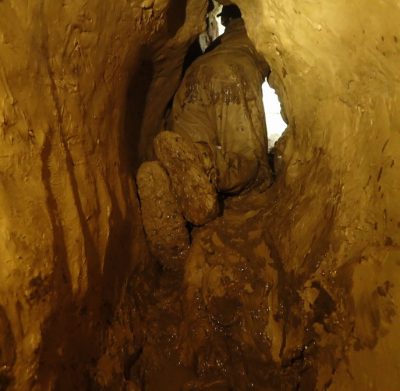 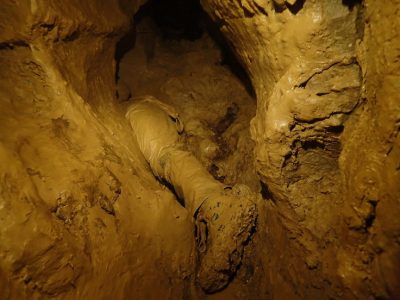 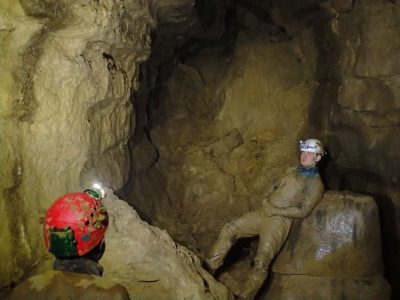 In the Right Hand Series 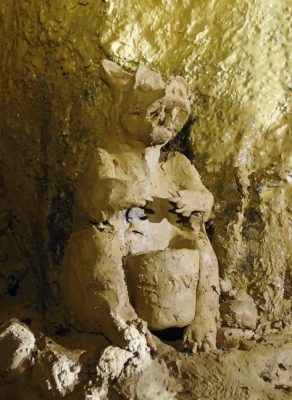 We headed back to the Main Chamber and then made our way through the Right Hand Series, exploring a couple of side passages along the way. We had to leave some other parts, like the Boulder Chambers area, for another day as getting though the entrance series hadn’t been straight forward and had taken some time and we wanted to get on to the Easter Series. We climbed up to and then crawled along a high ledge into Roof Passage, at the end of which are the series of three POWCC digs which lead into the Easter Series. The second dig, a U bend had developed a lovely pool of water to crawl through! We made our way to the end of the series, which is mostly in Millstone Grit, before heading out. We weren’t able to drop into the lower part of the series as we’d had to leave our ladder on the Second Pot, of course. 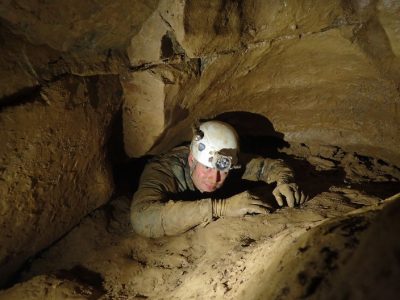 Dave in the breakthrough point of the Easter Series 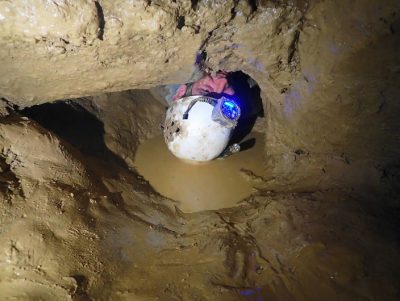 Tom coming through the U-Bend 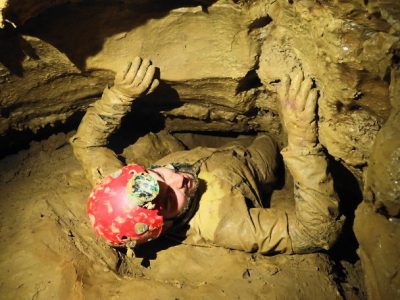 Exiting the U-Bend (Second dig into the Easter Series) 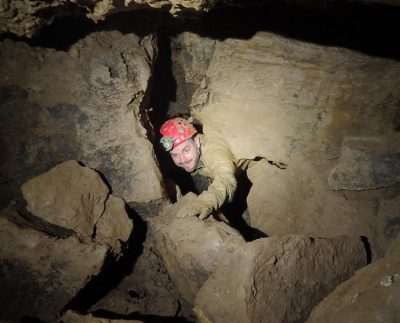 Tom in the Easter Series 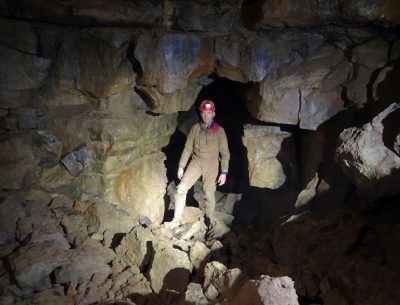 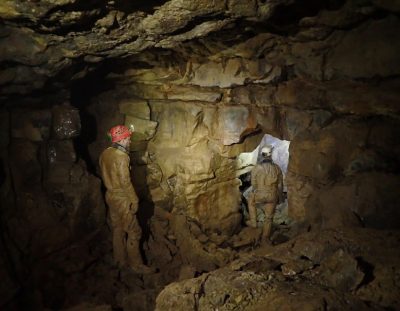 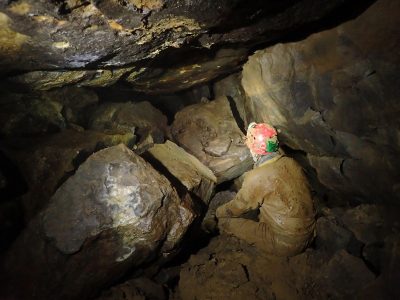 Tom at the end of the Easter Series

After our problems on the Second Pot on the way in, we were looking forward to a straight forward trip out. We got that until we arrived back at Talk Back! I’ll leave it to Dave to describe what happened next!

Dave – After being fairly certain earlier on in the trip that I wouldn’t fit through Talkback, I for some reason decided on the exit that I’d give it a shot anyway as opposed to going up the horrible slippery muddy slot by the 2nd pot. My choice seemed the right one as I saw Tom fly up with my no dramas whatsoever, so I chucked the bags up and luckily (as will become apparent) I chucked him my belt which had my HMS crab and sling attached. I climbed up easy enough and “inserted” myself into the squeeze. It soon became apparent that square blocks don’t fit into Talkback let alone circular holes as I managed to get wedged….really wedged. Then panic hit, which didn’t help as then my body slipped into the rift below and my lungs compressed. “Don’t panic butt” I heard Tom shout with a hint of a giggle in his voice whilst he unravelled my sling. Meanwhile I’m making noises which could probably be likened to a moose who’s been smoking 20 woodbines a day. Moments later as my face turned blue (I’m guessing….couldn’t say really after all the mud that actually caked my face) the sling appeared and after several choice words and some tugging I emerged at the top with the same relief I experienced after somehow getting wedged in the entrance pitch of Bar Pot in Gaping Gill a few months previous. I think I’ll just be using the 2nd Pot and muddy climb from now on. If I remember rightly I think poor Huw was underneath all this palaver!

After that ‘excitement’ and with the horrible sound of Dave’s constricted breathing still in my head, I made my way around the other way, while Tom and Dave waited above. It was a real struggle getting up the Muddy Slot and the small tube/rift above the Second Pot and I climbed our ladder very gingerly as the bolts and hangers it was attached to, are probably of the same vintage as the old chain ladder!

It was still very cold outside and so, after a quick ‘after’ group shot, we made our way back to the cars, admiring the fantastic views along the way. An interesting trip and I think Dave and Tom were impressed with the muddiness at least! 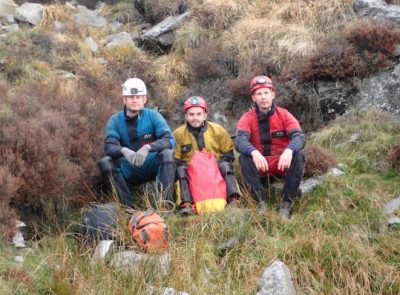 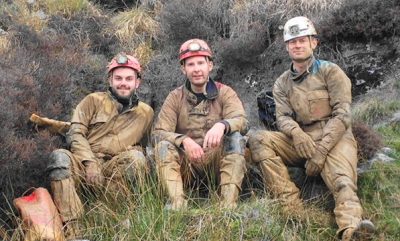 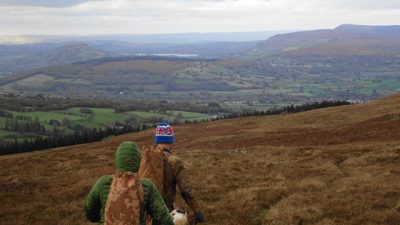 Great views on the walk back 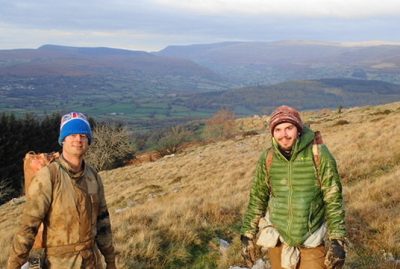 Happy but cold after the trip