With thanks to Helen Stewart of Morgannwg C C for the photos.

Myself and Tom attended South and Mid Wales Cave Rescue Team’s annual Big OFD Practice. Apparently it was big to, as the organisers hadn’t seen as many people at a practice before. Apart from the local people like us, there were representatives from the Gloucestershire, North Wales and Irish cave rescue teams.

As there were so many people, two scenarios were run. Both myself and Tom decided to join the A Team! Actually, this was the beginners team, for people new to cave rescue or who hadn’t been to a practice for a while. That suited me as this was my first practice for over 15 years!

Our scenario was that someone had fallen off the slippery climb at the start of Edward’s Shortcut and sustained a lower leg injury. The casualty, Claire, (who had volunteered!) was to be assessed, her leg splinted, then ‘packaged’ into a stretcher, hauled up the climb (which was treated as a small pitch) and carried out of the cave, where she would be loaded into the team’s land rover and driven down to Penwyllt. Also, communications needed to be established, both to the surface, where a person was stationed to relay messages to and from control at Penwyllt via radio and to the B Team involved with the second, more challenging, scenario.

The B Team were at the far end of Edward’s Shortcut and were to carry their, much heavier casualty, along the narrow winding passage and over the exposed traverse. In the end they brought their casualty all the way to the surface.

For underground communication, the team were using the new Cave Link system, which sends text rather than speech and which worked superbly.

Everything seemed to go well and I’m sure a lot was learned by everyone taking part. 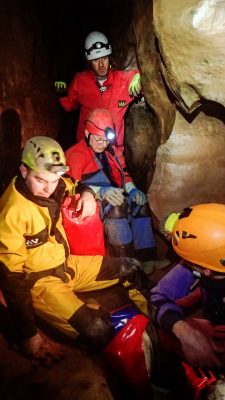 Assessing the casualty. She’s just out of shot on the right.

Carrying the casualty along Gnome Passage

The team, with the casualty still in the stretcher, after successfully bringing her to the surface