It was a very cold day (2-3 degs) but that didn’t keep us out of the water. Barry even went for a swim in the White Horse Pool!

The river was up a bit and flowing into the Main Entrance. We checked out the White Horse Pool first. Barry spontaneously decided to take a dip, something he regretted going by the look on his face when he came back out!

Then we headed into the Right Hand Series, where Gareth went through the Letterbox – you can’t really go to Porth for the first time and not do the Letterbox! We made our way to the Great Bedding Cave and admired the deep, clear water in the main canal. Heading downstream, we stopped to admire a seriously large tree trunk that had been washed in and wedged on the right. Then it was through the low (but very wide) bit, which was interesting due to the high water conditions, to the twin large entrances, which are the normal recommended downstream exit points. We were now close to the resurgence pool and me and Gareth tried to reach it for a look but the next section was even lower and after a low crawl on our hands and knees in the river, we could see that the water was up to the roof ahead and so turned back to the others.

We went out of one of the nearby entrances and walked down to the resurgence to have a look from outside. On the bench overlooking the resurgence is an entrance that none of us had been in before so we checked it out. A very short hands and knees crawl leads to a decorated walking passage that, in one direction, connects into the main cave via a very low, muddy and wet section. No one was going through there in today’s high water conditions so we made our way overland back to the Main Entrance, checking out the various other entrances on the way.

Barry in an entrance near the resurgence Photo – Huw Jones

Walking back to the Main Entrance Photo – Huw Jones

In the Main Entrance again and back into the Right Hand Series, we took a different passage into the Great Bedding Cave and then turned up The Creak, where we took a detour to check out Hewyl’s Grotto, where we encountered more refreshingly freezing cold water to crawl through! Returning, we made our way further along The Creak and after a quick look in The Maze, made our way back to the Main Entrance. We crossed over and took the longest of the passages that connect to the Upper Stream Passage. Somehow, one of Chris’ elbow pads fell off here and must have been washed away before any of us spotted it as we could find no sign of it after a good search! Chris and Barry returned to the Main Entrance, while me and Gareth went a little way downstream and then made our way back upstream via the oxbow, which had a very strong flow of water, and then out of the Tradesmans’ Entrance.

By this time the car park was very busy so we took advantage of the screens to get changed behind. A pint was decided on and we drove to Ystradfellte and went to the New Inn, which we’d heard had been taken over and was better than it used to be. It was obvious as soon as we entered that it was now very much a food pub and we were there at Sunday lunchtime! There are only a few tables and we ended up sitting around a tiny table by the door. Everytime someone opened the door, an icy blast froze Chris and Barry, who were sitting on that side!

An enjoyable trip, Gareth did really well on only his second caving trip, not seeming to mind the cold water or crawling around with no knee pads! Thanks to Chris for driving.

Photographs by Barry Burn (Click on image for larger view)

With BCC headquarters situated near the lovely surroundings of Clydach Gorge and The Llangattock escarpment – the obvious choices for beginners trips are Ogof Clogwyn or Ogof Egwlys Faen. However after much debate – Mostly between me and Barry we had decided the give Porth Yr Ogof, Ystradfellte a go.

Today’s new recruits were my friend of 26 years Jenny and her wonderful Fiancé Cheryl. Neither of them was overly fond of the idea of caving but Jenny gave in to my frequent requests and they decided to come along for the ride.

After an extremely late night the night before where we watched Eurovision, drank beer and ate possibly the most amazing tapas board I had ever created – we somehow were up and rearing to go by 8am! 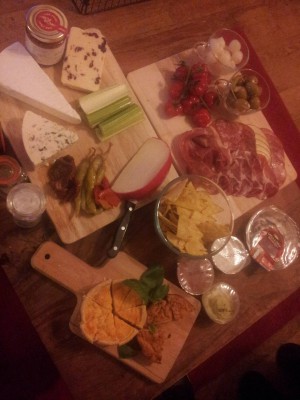 After meeting Barry and Zeb – We began our journey to the Neath valley while we discussed the days trip with our somewhat petrified yet enthusiastic guests and handed them some surveys to show them where we were visiting.

For anyone who has never been to Porth – be warned. You can guarantee the moment the sun is out, the whole of South and Mid Wales descend upon it like seagulls do to a dropped cheese sandwich, parking becomes a game of nerves and then once you finally park you’ll then be scrambling around the car for the £4 in change you need for the meter. 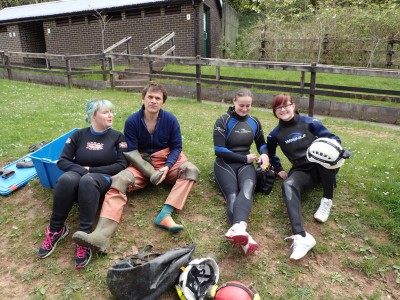 After a quick change in the car park (there are changing facilities available for public use) we were off to explore the depths of Porth Yr Ogof via the main entrance. By this point it was very clear that our previously enthusiastic Jen and Cheryl were having second thoughts but they continued into the cave and began to enjoy themselves and we took a short climb up that led to Upper Stream Passage and then out by one of the other entrances. 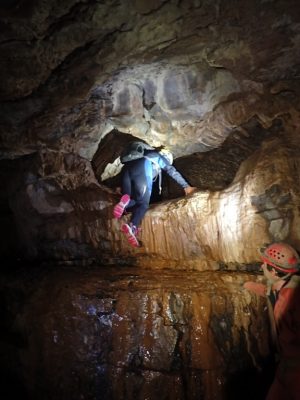 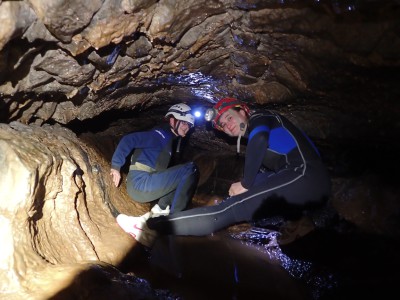 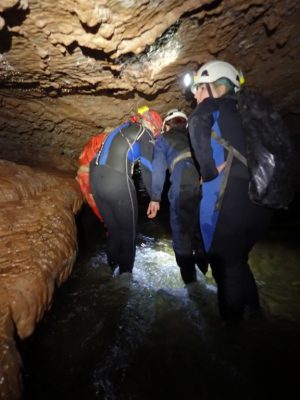 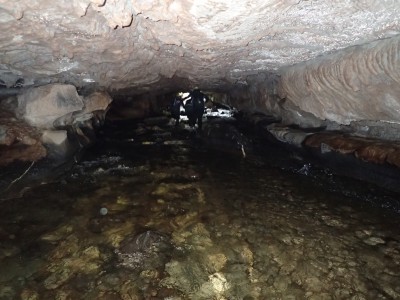 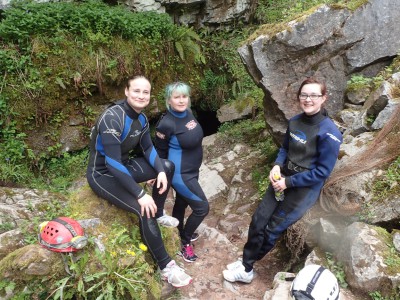 Re-entering via the Main Entrance again, we found some relatively squeezey bits near the entrance to the right to clamber through then headed to Upper Stream Passage. We exited the cave at this point then we went back down to the main entrance to take a look at the now somewhat busy White Horse pool. We then headed to The Maze and then slid into The Creek. It was at this point that Barry suggested we get the camera back in action and sent me down the wet underpass to take some photographs. 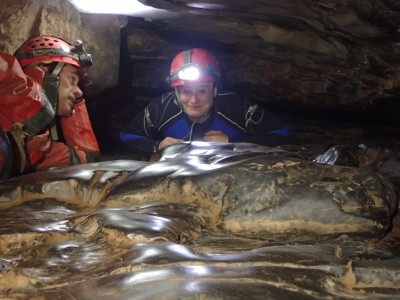 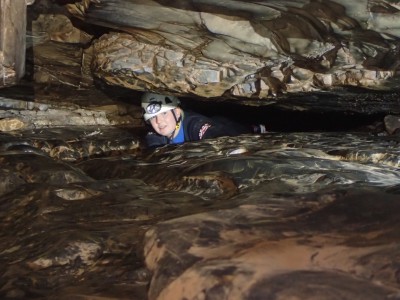 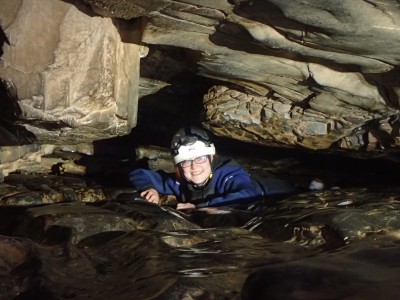 As we took a walk up the passage to the Great Bedding cave – I found myself some well polished rock and decided to use it as a slide. Sadly my antics resulted in me sliding down too fast and smacking my bottom on a rock just as a group of young cavers on an outward bounds trip came walking around the corner. 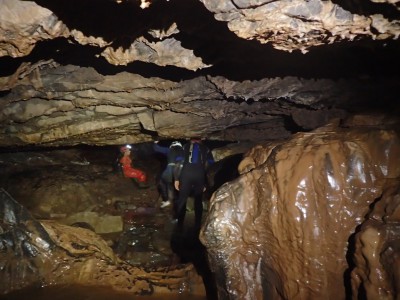 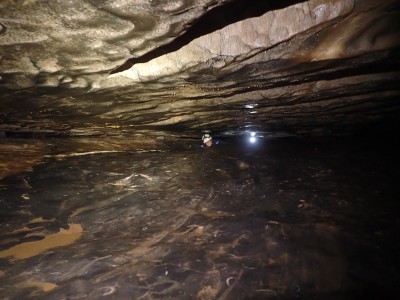 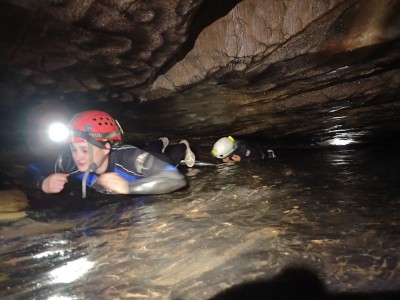 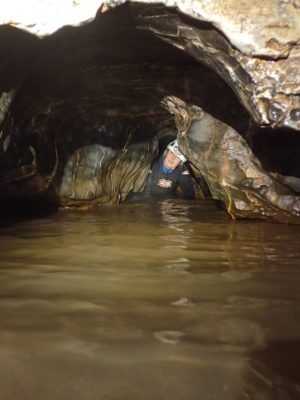 Vicky In The Rat Trap

After a stooped walk through the Great Bedding Cave – Barry took Jen and Cheryl out while myself and Zeb went to take a look at the resurgence which was choked with trees however Barry has since informed me that more recently, it has gained a sheep. 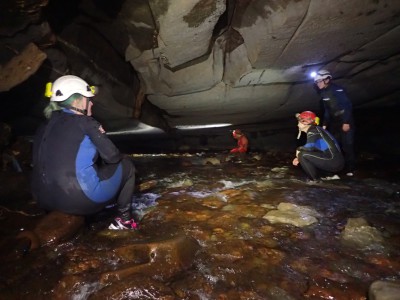 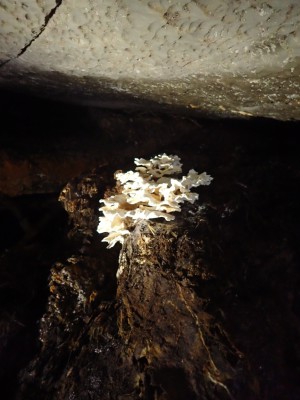 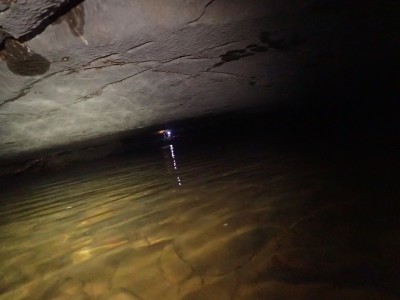 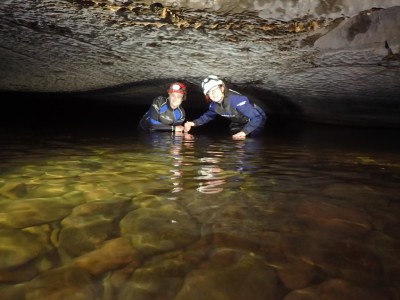 We concluded our trip by having a walk to The Blue Pool where someone who shall not be named dragged me in, a posh picnic of cheese and olives out of the back of the Land Rover and a beer in the pub down the road. 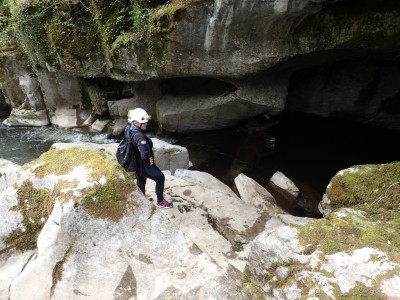 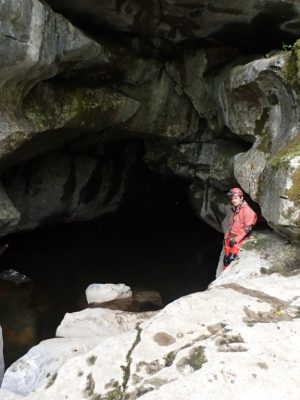 For me Porth is not on my list of favourites. There are too many visitors and not enough mud and tight spaces for my liking but if you’re a beginner or taking beginners out then jump at the chance as it gives you pretty much everything you need for a introduction trip.

Jen and Cheryl must have enjoyed it – They’ve come back for more!