All photos by Huw Jones.

As per normal drills for a Draenen trip, I turned up to Pwll Du at 0900 and funnily enough, the weather had changed from a lovely dry early winter’s day in the Usk valley floor, to a howling gale with threats of rain. I decided to lead the way by pointing my car into the wind for the inevitable chilly change in/out of kit. I was soon joined by Richard who has the luxury of a van to change and brew up in closely followed by Tom ‘McCrae’ in his Landy. Huw wasn’t far behind and we all convened before getting kitted up. Now it’s worth noting that the last time Huw and Richard had caved together was some 25 years previous and it just goes to show how small a fraternity the South Welsh caving is.

Kitted up within minutes we stomped off to the entrance like we were paid models for ‘Aventure Verticale’ but only better! Gate opened, local’s trees freshly watered and we were in. Forget my previous reports on Draenen, I actually love this entrance series! It’s fun…on the way in anyway.

We were soon at the climb down, but before we continued, Tom did some checks on the fixed aids as part of his checks for the Pwll Du Cave Management Committee. Log book signed, we stomped off from Cairn Junction towards Wonderbra Bypass and further onward towards Tea Junction where we stopped off for a quick water break and collect some rubbish and old kit we had spotted on previous trips. We piled it all up ready to take out on our exit in a few hours.

Conversation was flowing now as usual with mostly expletives from myself when finding those unwanted slippy edges of boulders for which Draenen has many! We boulder hopped our way through White Arch Passage and Lamb & Fox until we reached the Indiana Highway where the expletives swapped from me to Richard as he discovered his new wellies weren’t very grippy on muddy traverses!

We ‘’popped’’ out into Megadrive, I don’t know why but I really like this part of the cave and its always worth stopping to look up, around and behind to see what/how the water has done to create this cave. Heading off into The Nunnery and further onward turning right into Perseverance 2 which is a hands/knees crawl which every time I do it always ends up with my dragging bag getting stuck on something.  Forgot to mention, both The Nunnery and Perseverance are nicely decorated and well worth a very short stop to admire some of the formations.

Perseverance gets larger and we achieved walking status again only for it to suddenly stop at an 8m laddered pitch….and I mean it literally comes out of nowhere. You have two choices at the pitch, a rigid ladder which is getting old and has a few steps missing (so who knows when the others will fall off) or more conventional/safer caving ladder albeit more awkward. Being the brave souls we are we opted for the rigid ladder….purely so the fixed aids officer could do his ‘’checks’’…..obviously.

The pitch drops down into Cardiff Arms Park, an impressive chamber and the way on is pretty much back underneath the pitch and leads into Player’s Tunnel where we encountered some good formations and we stopped for drinks/pictures. Soon after, some more boulder hopping the awe inspiring St. David’s Hall was reached and lunch was called whilst sitting in the marvel of this enormous chamber. It has to be seen to be believed! 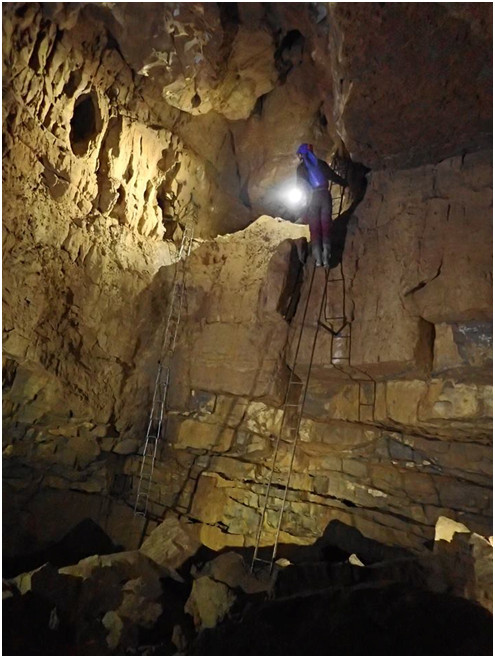 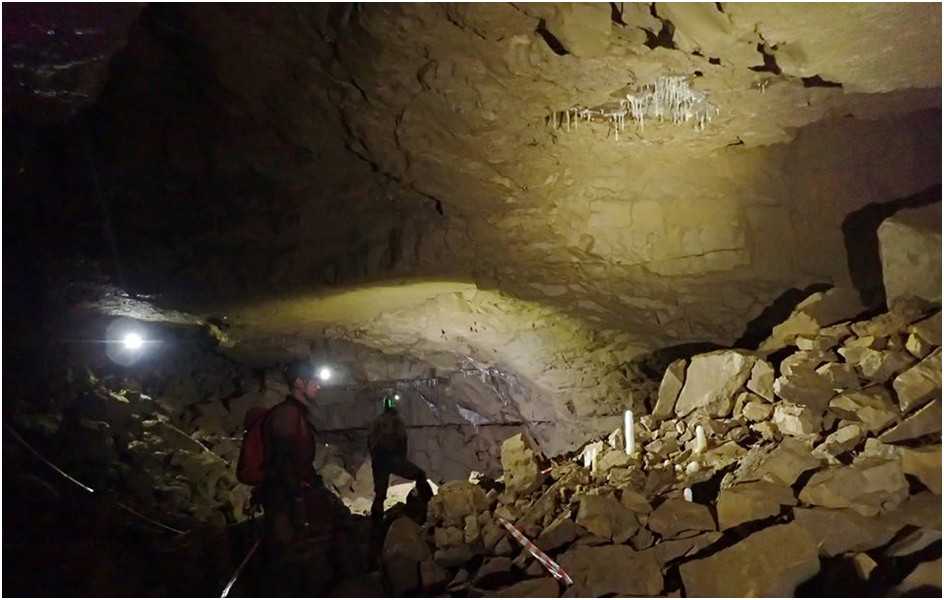 Dave and Tom in Player’s Tunnel 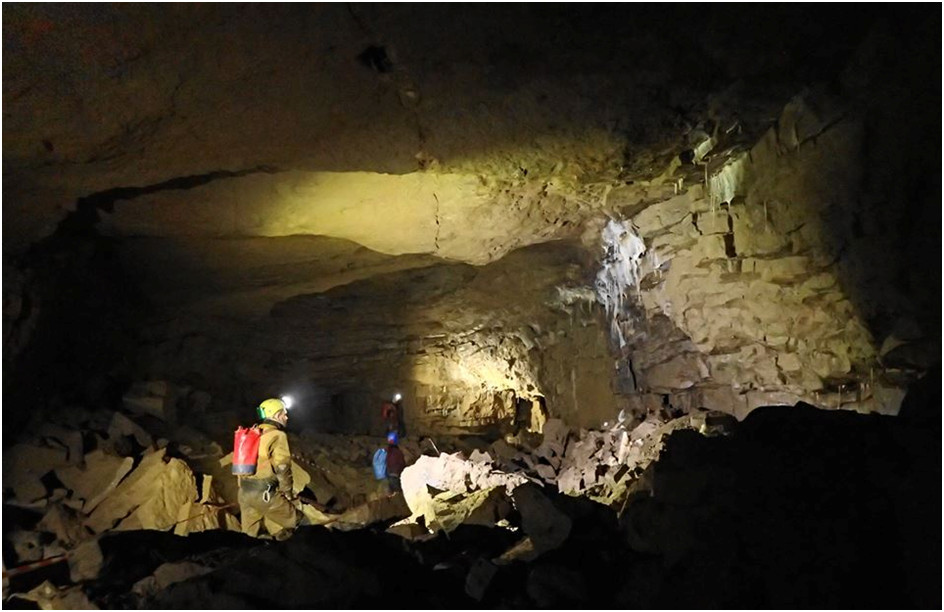 After lunch the fun starts, being The Round Trip Connection. Now this is where we start to cut across with an end goal of getting into Beyond A Choke Stream to head back out of the cave. To start, we headed into Squirrel Rifts, a notorious part of the cave for navigating with its many choices of different rifts to take and all very much polished by wrong steps before! Thankfully every time I’ve done the Round Trip I’ve been with someone who knows (relatively) the way through and Huw was no exception so no hiccups were encountered. Carrying on through Wooden Spoon we squeezed through quite an awkward sideways rift just before Haggis Basher and I heard swear words a youngest nephew should not hear from his uncle! But I didn’t blame him whatsoever.

Some stunning stals and formations were found in Haggis Basher where we left the bags and headed off to the chokes at the end for a nosey. Tom sadly found a newer formation in the form of a pile of human poo…yeah nice one whoever did that. We had a poke around in the chokes then we went back to collect the bags to head off towards Far Agent Blorenge where pleasant stream walking was encountered and the conversation was back in full flow. Best way I can describe Agent Blorenge is sporting…lots of awkward traverses where Tom was heard to be having fun with his bag getting stuck at every opportunity, a couple of unofficial fixed aid climbs down and also the fun Sewer which is a short duck but with today’s water levels was just a soaking. Towards the end of Agent Blorenge the cascades were met with some interesting climbs down. 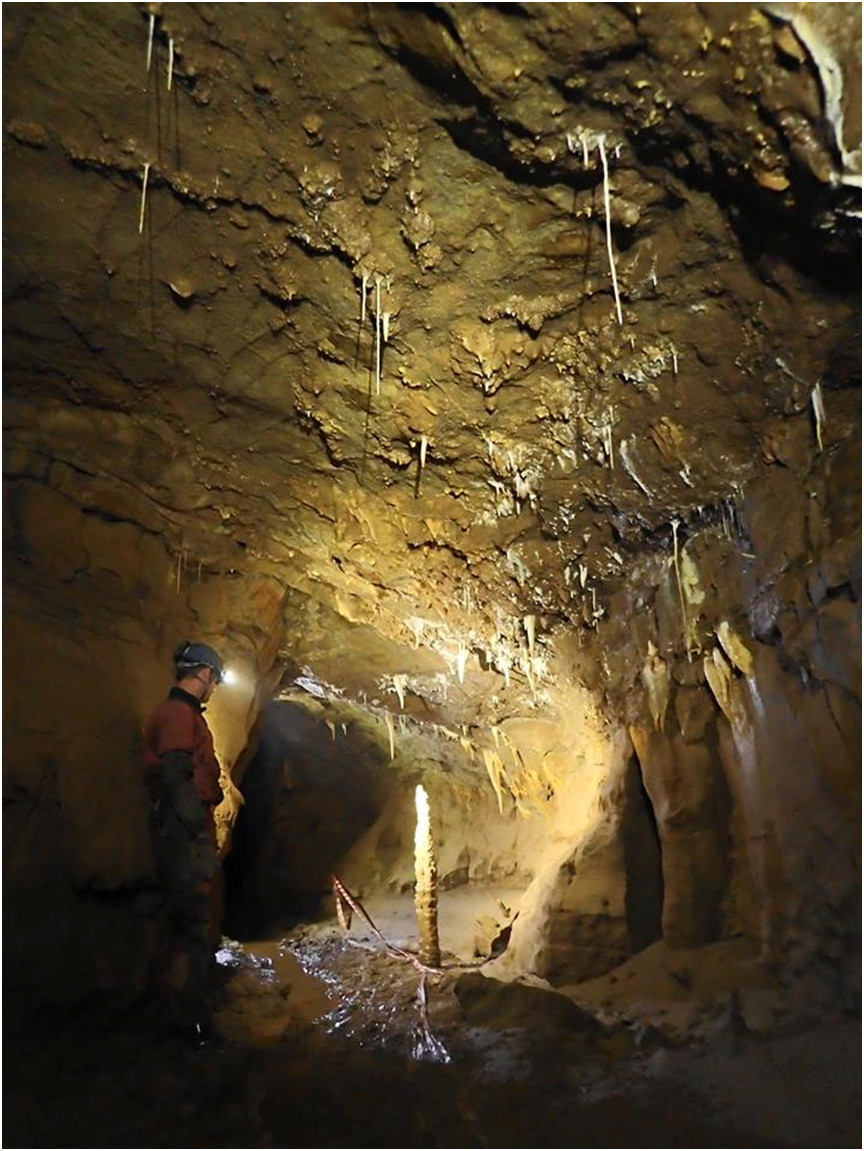 The Beyond A Choke stream way is reached at the end, we took a right, ending the connection, Round Trip and beginning the slog out of the cave. I love this stream way, it changes so much in its length and even has a few boulder chokes chucked in just for good measure and most importantly my favourite formation so far in this cave (I still have much more of this cave to visit) in the form of pure white stalagmite up on higher level of the stream way. It’s very photogenic!

We passed the entrance to Gilwern Passage and checking our watches decided it would have to wait for another day and collected the rubbish from Tea Junction. We exited the cave to more darkness but nice, still weather and the conversation soon changed to what was for tea and what beers were in the fridge.

Cars reached, kit stripped and final few words of the day were shared!

Heres for the next one 😉