When Huw suggested an after work trip, I assumed it would just be a quick, easy trip. The type I am usually accustomed to after a hard days grafting. How wrong I was…

After multiple attempts of navigating through the brambles, we were finally at the entrance. Helmets on and we took our last glimpse of daylight before we got moving. The entrance rifts didn’t feel as tight as I’d been told they were, horror stories of people not being able to lift their legs up enough to get back out were going through my head. But before long and without too much faff we were at the top of the pitch.

What a nice pitch it was. Trusting myself to the rope felt a bit unnatural but a few tentative seconds later and I was on my way down. It was good to finally use the rope I had got at a bargain price at the Cave Rescue Auction back in June, I still haven’t found a use for the pulleys though…

Soon enough we were in the streamway. A quick food stop and onto the appropriately named Midsummer Night’s Streamway. The formations and scalloping of the passage are stunning. It was all fun and games until we came to Hammer Passage and then the ominously named guillotine climb. Named, we guessed, due to guillotine nature of the rock, looking ready to come down with a swift chop. From there on it was crab walking interspersed with the occasional climb up slippery, sharp walls only to have to climb down again a few meters later, then having a flat out crawl through the streamway. It was sporting to say the least! It was a relief to see the end sump as Midsummer Night’s Nightmare Streamway had certainly lived up to its name, completely writing off my pair of kneepads in the process. After planning a through trip from Shakespeare’s to Llanelly Quarry Pot, we made good time back to the junction with the entrance, for more food and water before going to the more enjoyable end of the cave.

The highlights of this end of the cave included some amazing formations, including the Michelin Man, which actually looks like what it’s named after, unlike most formations. Ryan’s Duck was great fun, and quite possibly my favourite part of the trip, with the exception of abseiling down the main pitch. We failed to find our way to the Blue Sump, then we headed back towards the entrance, with a vow to return to find the Blue Sump and to explore the Totem Avens.

We made our way back to the entrance pitch. I was really starting to feel fatigued from the extreme nature of the downstream section of cave. Next came the dreaded climb back up the pitch and the tight entrance rift.

After a lot of swearing and struggling we were finally on the surface and on our way back to the cars. By the time we had gotten to the cars, it was just past 11, the quick easy evening trip I’d expected had turned into a 5 hour epic trip. Feeling reinvigorated by the cool night air, I felt like I’d be able to do it all again straight away!

The cave is definitely a collectors piece, especially the downstream section but I am glad to have made it all the way. I don’t intend on returning there in the near future, upstream on the other hand is certainly worth a revisit! All in all a very good, hard trip. Thanks to Huw for suggesting it and for rigging the pitch. 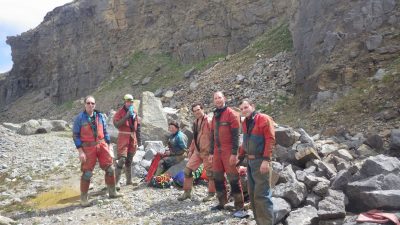 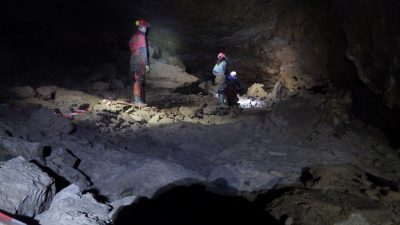 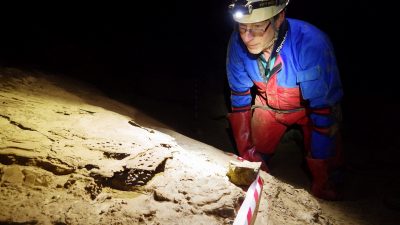 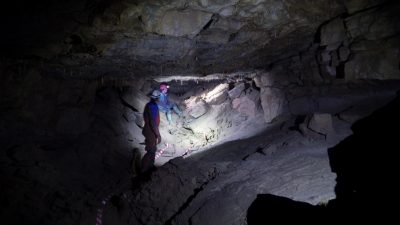 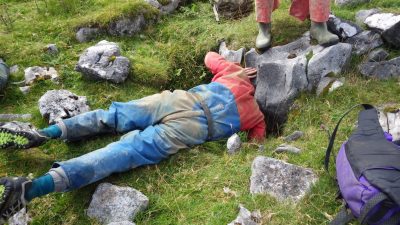 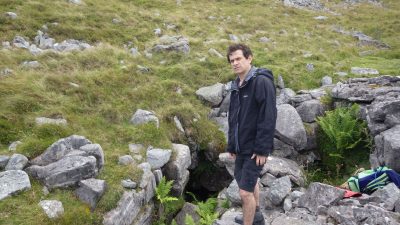