I had a feeling that Ogof Ffynnon Ddu 1 could be addictive as we changed ready for another trip into this system, this time to explore the Waterfall Series. 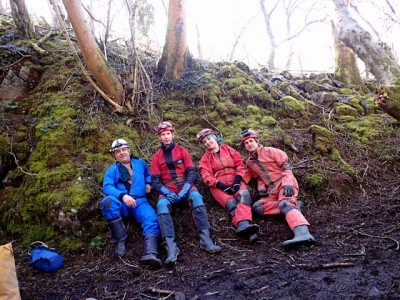 As before, we made quick progress through the Cyril Powell series past The Cathedral and up The Toast Rack. A small squeezy passage on the right looked inviting to the lover of small places that is Zeb Zerbino and he happily inserted himself into it to see where it went. The rest of us took the sensible option of walking around the corner to watch him come out the other end. Continuing on soon saw us back at The Step and then into the Main Streamway.

Zeb and Vicky in Main Streamway

The Main Streamway was well behaved as the weather had been settled and we quickly proceeded along it, stopping for a few photos on the way, past Lowe’s Chain where Vicky again told Tom and I off and then to the start of the traverse up into the Waterfall Series. The traverse begins at stream level and gradually ascends up via a fixed wire to a short climb through boulders to bring you out in a high passage that is followed to reach a junction with the Dry Way straight ahead and the Wet Way to the right. We carried on along the Dry Way to reach Idol Junction where a climb up to the West Leg can be taken or another branch followed to the East Leg. Here one wall is covered in a pure white formation that seems to cascade down from the roof high above and I spent a bit of time trying to get a half decent photograph of it while Huw climbed up into the West Leg for a look.

Traverse up to Waterfall Series

Barry Coming Through Boulders at end of Traverse

Carrying on to the start of the East Leg, a passage can be followed to a climb up into Crystal Pool Chamber and The Annex. My back was complaining a bit by this time so I elected to stay behind and photograph the many helictites that were here whilst the others went on to explore. When they returned, we had a further look around with Zeb squeezing into a small passage with an incredible floor mad of crystals and then started to return. On the way back, Zeb and Vicky decided to go via the Wet Way whilst the two sensible members of the party took the easier Dry Way. Back to the top end of the fixed wire and soon we were back in The Main Streamway. Hopefully when my back and neck improve, I shall make a return with a view to exploring some more of the series.

Zeb Coming out of Crystal Plassage

Back at stream level, before returning, we carried on around the corner into the impressive, but rather forbidding Boulder Chamber. Here a way on through the boulders by the right hand wall will take you through to the connection with OFD1.5 and the possibility of a through trip to come out via Cwm Dwr or to the top of the hill and the OFD2 entrance. I hung back and waited as my back was definitely twinging by now and the others crawled into the boulder choke to have a look around and then it was back along the streamway when they returned. 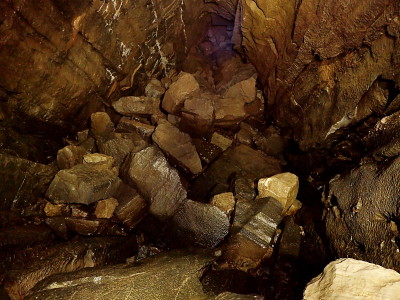 This time The Step was passed to continue on to leave the Main Streamway at the passage that leads to Pluto’s Bath, a deep pool that can be traversed across but is probably easier to just accept that you are going to get wet. Zeb made a brilliant show of how not to traverse over it and created a good splash as he hit the water. Luckily, I had the camera on video at the time. It was at this point that I discovered that buying cheap isn’t always the best policy as the fleece undersuit I’d bought to replace the one I shrunk turned out to not be very free-draining and I doubled in weight. 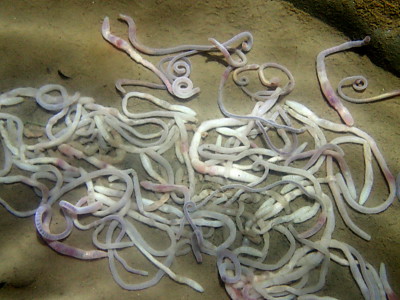 Emerging back at The Toast Rack, we quickly made our way back to the entrance although the strange sight of a large number of white worms in one of the artificial pools was intriguing. Having a close look, they revealed themselves to be earthworms that had lost their colour. They must have been washed in during recent wet weather to be deposited in the pool. But why they would be ‘bleached’ almost white though?

A quick change and back to drop the key off at Penwyllt and after a chat with the duty warden, Huw had to dash off but Zeb, Vicky and I took the opportunity for a couple of pints in The Ancient Briton to round off another excellent day in OFD1.