Group 2: The Nave and Swamp Creek

Sunday morning and we met up and travelled in groups from our various houses in Wales. Our plan was to meet at South Wales Caving Club HQ and confirm the routes according to the actual attendees on the morning. I had the opportunity to join the round trip, but as a novice, albeit apparently with good beginner confidence, stamina and technique I opted to improve my technique and confidence a little more with a more straightforward trip. I was anxious that had I lost my confidence in my ability during an exposed traverse, it would put my colleagues in a difficult situation. I therefore chose to cave with with group 2, heading to salubrious passage and swamp creek. We had two prospective members with us, Mark and Rhydian. Always nice to welcome new potential cavers.

We registered our trips, collected the keys and after changing, headed up towards the entrance. One benefit of the very strong wind that was signalling the arrival of Storm Gareth was that it was a tail wind. A quick stop to allow Rhydian to sort out his wellington boots, which would not fit over his under suit and socks. He sorted this wardrobe malfunction out, taking about 4 attempts with various options until he found the right combination for his wellies to sit tidily. One thick pair of under socks removed and threaded around his belt and we stopped for a quick group selfie before splitting up and heading off on our own separate routes. 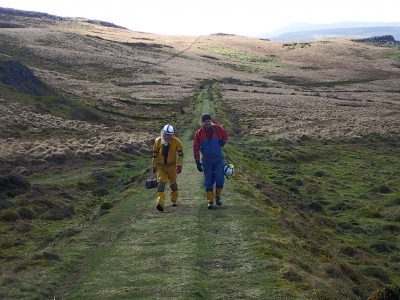 Nick And Clinton Heading Up The Hill

Our group headed off towards Big Chamber Near The Entrance then and then made our way over very slippery boulders to The Brickyard. Barry helpfully reminding me to remember to look back every now and again, particularly at junctions to improve my route-finding skills. Helpful reminders and I did see the route out with more familiarity than the blind ignorance I have possibly had on my previous trips.

We walked through Gnome Passage. And yes, in my mind, those gnomes did seem to have their own personality. A brief look at the wedding cake, which maybe has melted sometime before my visit. Adam then asked if we wanted to see the Ribcracker Pinnacle, this was at the near end of Edwards Shortcut and is where a club member had a rib-cracking moment whilst going over the top. Back up to the junction at the top of Gnome Passage. At the junction at the top of the corkscrew, we met a group on their way out. This provided a good opportunity to stop for a short rest and a chat, whilst we waiting for the departing group to clear through. A careful descent into the top of The Corkscrew. I was a little too careful, As I did not notice which way Adam went through. I could see a more direct slot through, but was not sure whether I would fit through it. Fortunately, Adam was on the other side to provide guidance on the route down, ah so it is the right-hand side threading around the boulder at the top of the large staggered drop. Well that focused the mind. 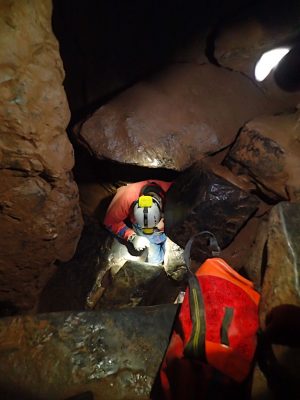 Down Through The Corkscrew

The corkscrew completed by all and it was down to the streamway. Very different here to the streamway in OFD1 with enough parts to ensure that the feet could get a good soaking with the deeper parts allowing for water to overflow the boots. Leaving the streamway to see the impressive Trident formation. We took our time here setting up various pictures with different people from different angles. A great excuse to hang around and admire the beauty of the formation hanging down from above. Round to the judge, in some ways, just like the gnomes, seemingly having a personality of its own, when viewed from the corner of my eye… 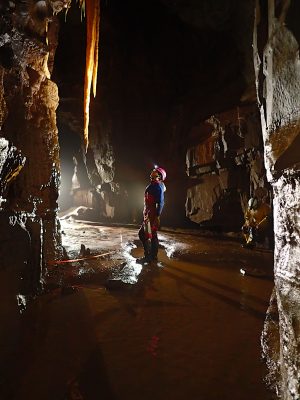 Then we pressed on, passing the 3 Brynmawr Caving Club members from Group one, on their round-trip in the passage before the crossing of swamp creek and over to the top of the nave. Looking down into what seemed to be a bottomless pit. 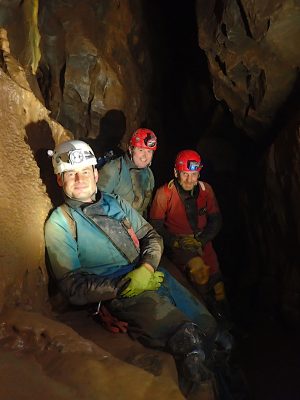 Back to the crossing of the stream and we climbed down and turned right to go into Swamp Creek. After a couple of bends, I could hear the distinctive sound of a deep-water alarm. The unmistakable sound of male voices going up an octave or two when the water reaches a certain height up their body. The reward around the corner was a very beautiful formation above and to the right. It was now 14:30 and time to turn around and make our way out in order to get back to the cottages in good time. Upon leaving the water for the last time, a quick snack and a chance for all to relieve themselves of the additional weight of water in their wellington boots, before climbing up into the corkscrew. The double back on the climb up adding a little more of a challenge to what I found to be an enjoyable scramble up. This also ensured that any chill from the water was soon driven away from within. Some of the climbs over the boulders around the area of the brickyard were made rather tricky due to the rather slippery nature of the surfaces. The shower entering the chamber near the entrance being a great opportunity to add a little extra to some final photos inside the cave before crawling out of the entrance. Out of the entrance into the icy blast of strong damp wind making the arrival of Storm Gareth. We headed down to the headquarters without hanging around as there was heavy rain visible on the other side of the valley and it was heading our way. The sleet starting just as we entered the cottages to get changed, signing out and heading down to the Ancient Briton for a warming drink before heading off on our differing routes home.