The plan for today was to visit Agen Allwedd. However due to the key not being available we had to make a late change to the destination. We decided to visit the Nedd Fechan Gorge. We met up at the respectable time of 10:30 at The Angel pub car park in Pontneddfechan. The laybys were already mostly full with day trippers to the four waterfalls walk, and if that was not enough, there was also a coach trip parked up in one of the laybys. Great for the local tourism to be so busy in March. Furthermore, the only public toilet in the village open at this time proving popular with a queue of about 10 people long, I decided therefore to cross my legs and not join the back of the queue of day trippers. We headed off up the hill in our vehicles and up onto the open land admiring some new born lambs at the side of the road, as the trees gave way to open moorland. Following the long no through road with the final part being on a steep left-hand bend with about a quarter of the road missing. I edged my car gently around the corner and parked in the area just by Bridge Cave entrance. There were a couple of fellow cavers getting changed in the parking area. They were heading off for some diving. Adam and I were just there to have a mooch around the gorge and explore some of the variety of caves in this tight little cluster.

Our first objective was Bridge Cave.

Back to the cars to change, chat and drink a warming cup of tea before heading home.

Initially I was disappointed about not being able to visit Aggy, a cave that I have not been to yet. It would have been a great walk in and out to the entrance in this fine weather too. But sometimes things happen for the best. We decided to go on a different trip and I must say that I thoroughly enjoyed my time. It was a good few hours spent in great company. It had a child like sense of exploring this hidden gem in the southern Brecons. I know that I will be returning here to enjoy the delights of Nedd Fechan Gorge, both above and underground it really is a place of beauty and tranquillity. 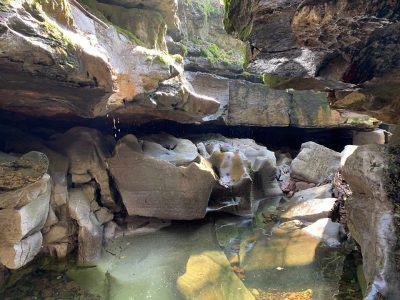 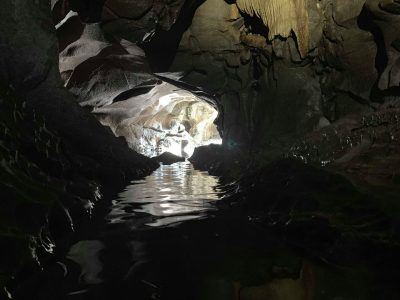