We were getting close to our destination now, the Northern Lights in Ogof Fynnon Ddu2. We were three members of Brynmawr Caving Club, Myself, Rob and Mick, and had got to a point where there was a squeeze up through a dug out section over boulders and under a low section of roof. Mick and I had slithered into the comfortable standing space beyond and were watching as Rob tried to get through. Unfortunately Rob’s efforts were coming to nothing, “It’s my chest” he groaned as he tried a different contortion. “Try moving over a bit” we helpfully suggested, “Or on your back,” but, try as he might, Rob wasn’t going to be seeing the Northern Lights that day. I had visited there on a couple of occasions and Rob and Mick were yet to see this impressive part of the system. We made a quick decision that we’d stick together as a team and retreat as one. After all, Rob could lose a bit of weight and the next time we’d be sure to get through. Life has a habit of getting in the way and I ended working the other side of the country, Rob moved away and tragically, we lost Mick at far too young an age and so it was, that return to The Northern Lights with a slimmed-down Rob was never made.
It’s now August 2017 and after the passing of nearly twenty years, I have grown a bit older, a bit greyer and also a bit outwards, but am still enjoying trips into many of the South Wales caves. Tom, a young whippersnapper caver, and I were trying to decide where we would go at the weekend. I suggested OFD and thought that I detected him mumbling something about ‘showcaves.’ “How dare he?” I thought to myself and so suggested that we should visit somewhere a bit off of the usual tourist routes and head for The Northern Lights in OFD2. I quoted the description from ogof.org to him “That is accessed through a rather complicated and sporting route” and so it was settled. It was agreed that we would head for the Northern Lights but that bearing in mind that I had a hazy memory of it being a difficult place to find, that we’d be happy with just heading to that part of the cave with the intention of getting to know the area better.
On the day we were joined by Vicky and Zeb for the long walk up the track to the entrance. Luckily, we weren’t too far from the cottages when I asked who had the survey. Blank looks all round meant that they’d been left somewhere other than with us. “I gave them to you when we were filling in the ticket” said Vicky cheerfully as this meant that she could abrogate all responsibility and it was down to me to walk back and pick them up where she’d left them. So, I placed my Pelicase with containing the ‘F—ing camera’ as it was known to some and hurried back. At least now I could claim to have travelled further than even Young Whippersnapper Tom and have a reasonable excuse for being knackered later. So, I ambled back to where they were sitting with curious smirks on their faces, retrieved my Pelicase and we were off up the hill again.
The entrance was soon reached and as everyone was adjusting their kit, I produced my camera announcing that we had to do the obligatory selfie. I’d been sure to charge my camera as I love taking photographs of trips to record the experience. Many will inevitably turn out to be ‘crap’ but even these are valuable memories to be stored for later years. So, it was with a puzzled face that I looked at my camera as it failed to turn on. Repeated pressing of the power button gave nothing and I wondered if it had frozen so opened the battery compartment to remove the battery and reset it. The empty battery compartment induced a sense of shock, horror and bewilderment which gave way to comprehension as I connected the missing battery with the smirks seen early. “Okay give it back” and a few choice words resulted in my battery being sheepishly returned. I must admit to losing it slightly, there are some things people shouldn’t mess with, redheads, The Zohan, other people’s wives, and a photographer’s camera(I like to think I can call myself one). Now it was my turn to look sheepish as I got my way with the selfie and we opened the gate and entered the cool dark of the cave.. 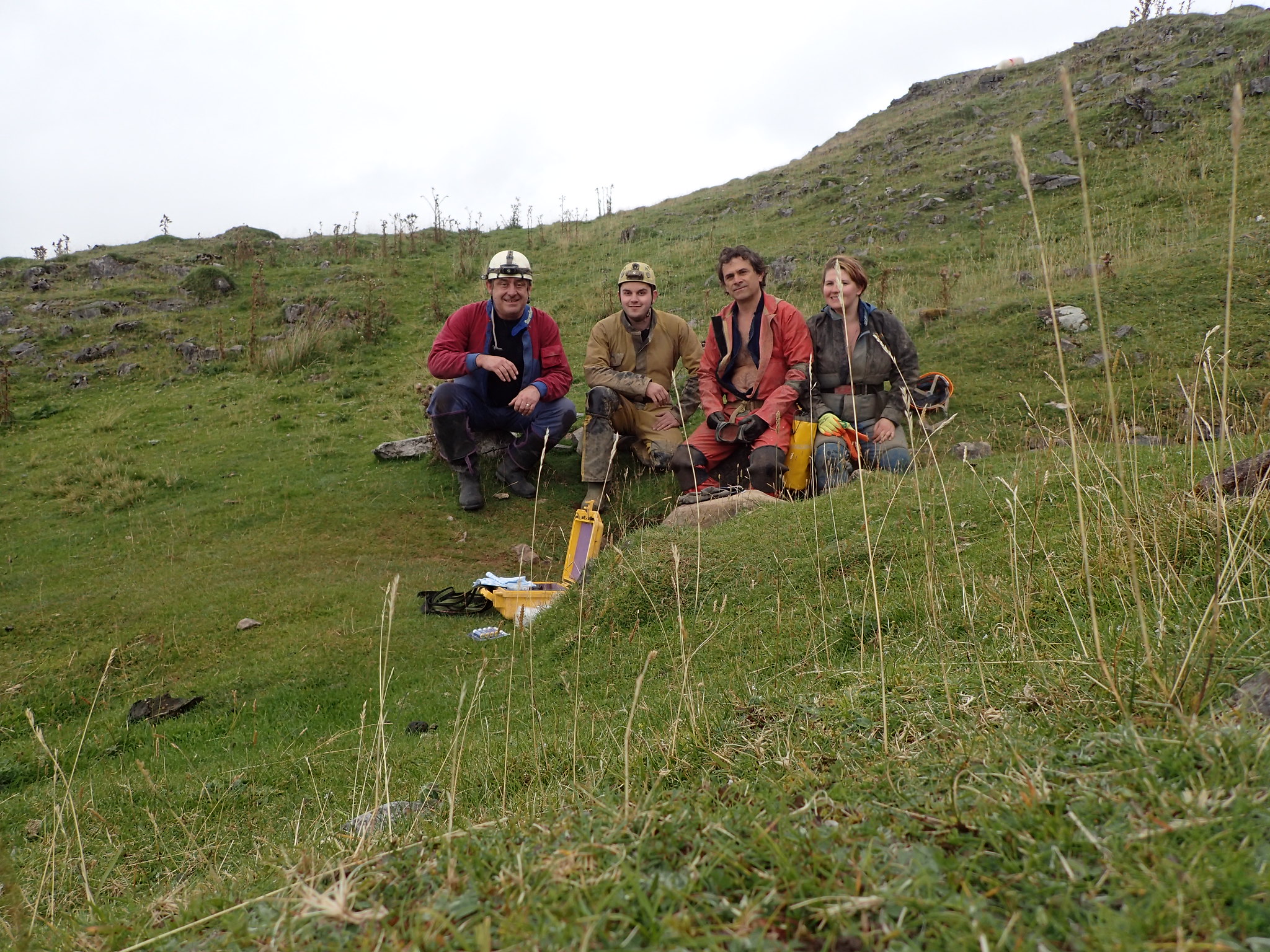 The plan was to head through The Brickyard to Gnome Passage and then The Wedding Cake. From here we’d head down Salubrious and a quick viewing of The Trident and The Judge before on to The Crossroads and the beautiful Selenite Tunnel, Shatter Pillar and then sort of find our way from there relying on the surveys and my memory.
It was soon apparent that someone was having oversuit trouble as it had obviously ‘shrunk’ causing some trouble when needing to climb in the Brickyard. No worries though, we carried on and were soon out and in Gnome Passage and turning into the passage that leads to the Wedding Cake. A short stop to admire this formation and, as usual, wondering who would want a cake like this for their wedding. It would be more accurate to call it the Wedding Splat. Young Whippersnapper Tom was eager to get going and led off down Salubrious and I followed. The odd little tearing sound as we clambered over boulders seemed to indicate that the oversuit situation was gradually resolving itself and we turned off for another short stop at The Trident. I was getting twitchy at this point as I hadn’t taken any photographs, this wasn’t normal. The camera was in the Pelicase instead of my inner oversuit pocket so it couldn’t be whipped out so easily. I had taken some pictures of the Judge and Trident last time I was here but was not happy with them and want to have another go with a bit more thought to the lighting. This wasn’t going to be the time though as we were off again to The Crossroads, across President’s Leap with me again telling myself that I shall have to find out why it is called that one day. In Selenite Tunnel I was allowed to take a photo and shot a couple of Vicky looking down the passage. 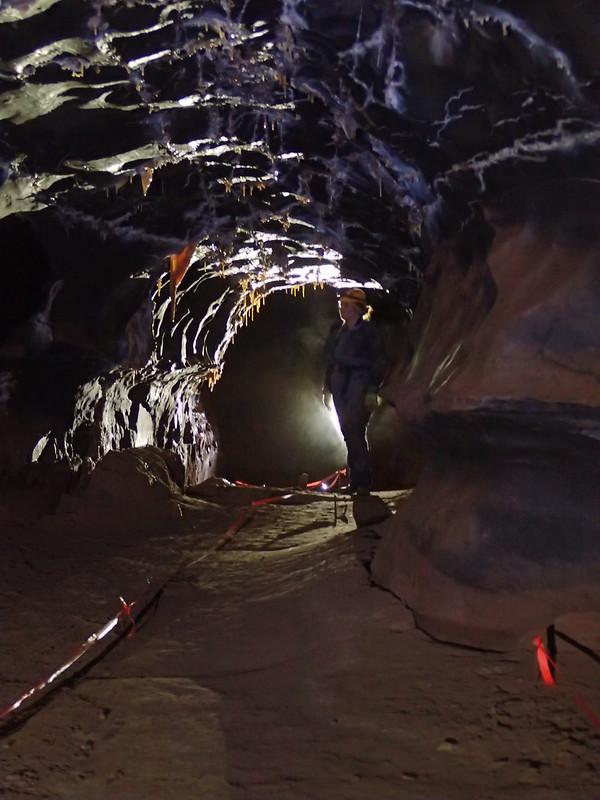 After this, we headed to Shatter Pillar and headed down where we had a choice of passages on the survey, the ‘straight way’ and the ‘wiggly way’ as we called them. We chose the ‘straight way’ which we followed to Cross Rift where more boulder clambering brought us to Mignight Passage and then into the top of Midnight Chamber.
We were running late by this point, we’d dawdled a bit and along with getting into the cave an hour late we loitered in Midnight Chamber and pondered where to go now. Someone did mention something about a nice pint of ale in the Briton but we weren’t going to head out yet. It was decided that the elite team of Young Whippersnapper Tom and Zeb The Snake would head off toward the Northern Lights with the survey and some vague recollections from me. These amounted to the squeeze where Rob got stuck, a longish ascending squeeze into the start of the Northern Lights and an ascending tube to be climbed. “Nothing too bad though” I said.
As the others headed off, Vicky and I went for a look down Midnight Passage. It’s not an unpleasant passage and you can soon hear the streamway up ahead. Pausing to take photos, we soon had used up half our alloted time and retraced our steps back to Midnight Chamber to find our intrepid explorers moaning about squalid crawls and water, “I really don’t remember any of that” I said. “Anyway, I want to try out my bulb firer” and produced a strange contraption that I’d made up from an old bulb firer and some spare wire. Vicky was placed at the end out of sight and Tom was told to stand in an ‘epic’ sort of way. “3, 2, 1 fire!” And there was light, lots of light, it worked! 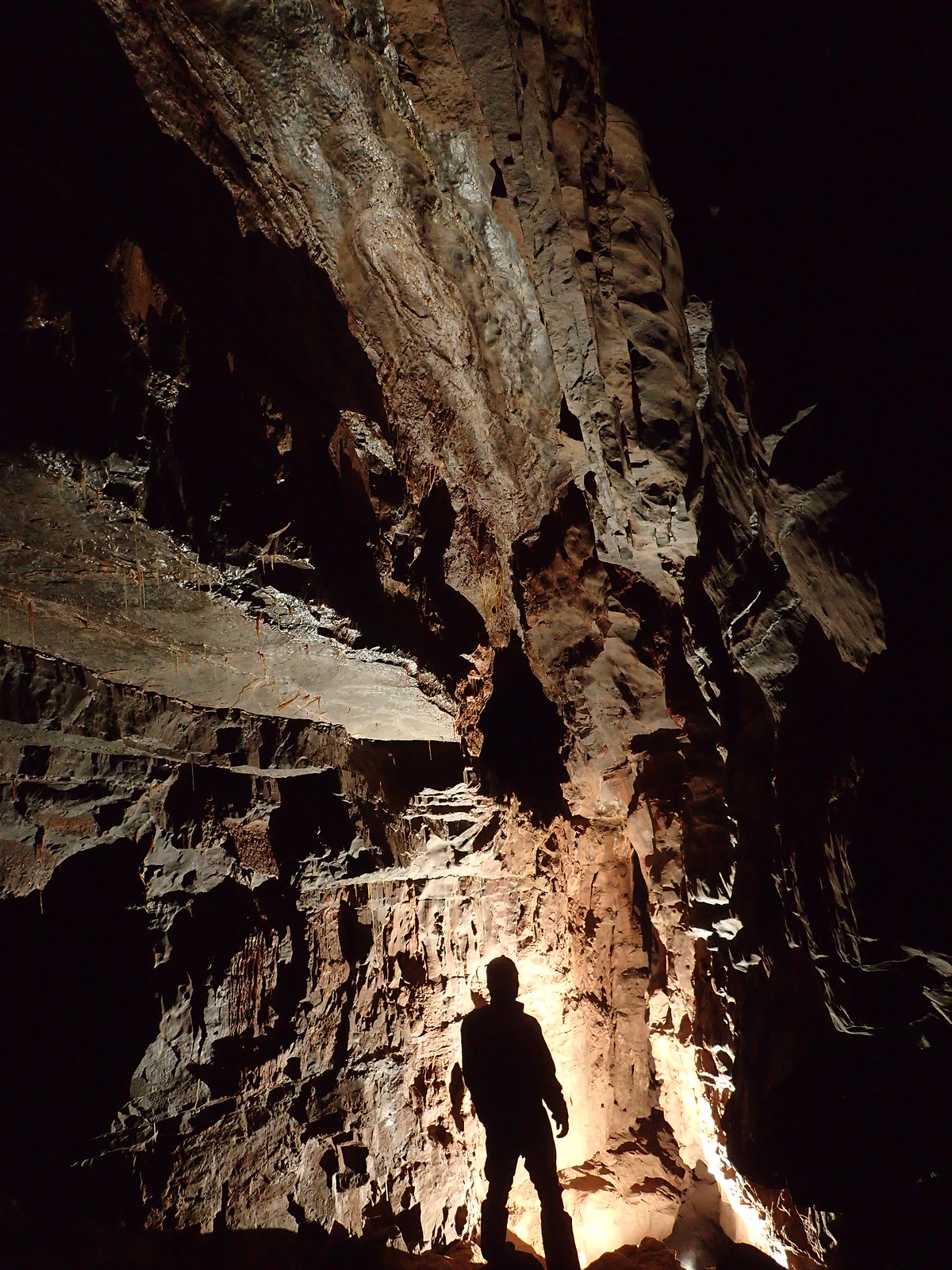 By now, the pub was calling and we headed off. Tom and I had a quick look up the passage that goes off below Frozen River and then we returned back via ‘Wiggly Way’ where we were surprised by some nice helectites and crystals on the walls along with a band of some fine fossils. 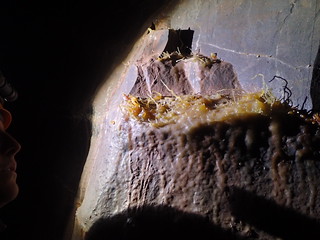 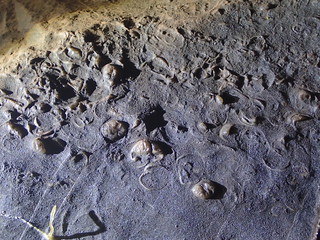 The rest of the way was uneventful and was pretty much the inward trip in reverse until we emerged back into the outside again and back down the hill to change and a welcome pint in the Ancient Briton.

I don’t think I will ever tire of Ogof Fynnon Ddu, there are always places to go and new things to see in there. It just needs you to head off of the tourist routes and have a look down the small passages on the survey that you’d never bother with usually.
Young Whippersnapper Tom is keen for a visit to the end of OFD3, somewhere I’ve never been to yet. I think I should add it to the list.