After booking a Yorkshire trip for later in the year, we decided it would be a good idea to brush up on our SRT and what better place to do it than Pwll Dwfn? You can practice on indoor training walls all you like, but you aren’t SRT proficient until you have used your skills in a real world cave.

The date was set – 7th April 2018. Morning broke with some heavy rain, and me thinking ‘Do I really want to trudge up the hill in this weather?’. Despite frantic pleas to my caving colleagues for a Daren Cilau trip, Pwll Dwfn was still on the cards for the day, regardless of the weather.

Meeting at the DYO car park, Huw and I had a quick coffee before Dave turned up around 1030. We were soon changed and on our way up the hill, stopping for the occasional photograph. 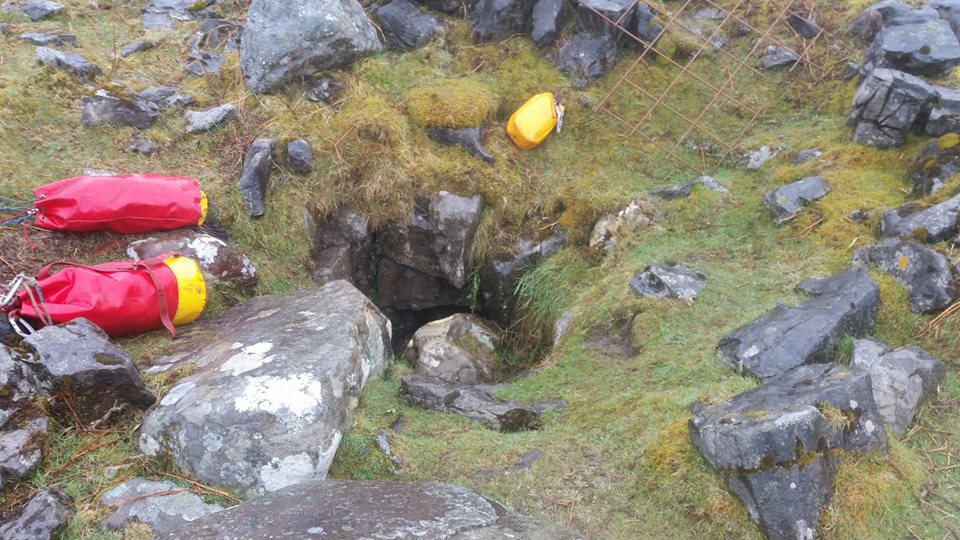 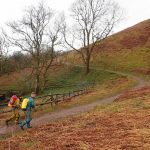 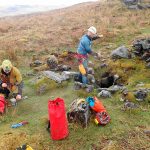 Huw Jones – Prepping for the trip 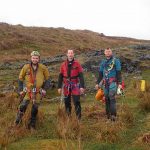 We were soon at the cave entrance, and kitted up. One last photo before we wave goodbye to daylight for a few hours. Huw was down first, to rig the first pitch, Dave and I followed with the rest of the rope bags. We found the cave already rigged with mostly 9mm static rope of a suspect vintage, we elected it would be best practice to shadow rig our own ropes alongside. The in-situ ropes were a nightmare when it came to rebelays and deviations, forever tangling around our fresh ropes. We had to be mindful we were clipping into the correct ropes at the various pitches and obstacles, although our nice clean ropes were easily contrasted against the muddy, worn, in-situ ropes.

We were making good time down to the bottom of the pot, gravity is a wonderful thing! My favourite was the 35m 4th pitch, with a deviation part way down.  It wasn’t far from my mind that for every metre we descended, we would have to climb back up. Gravity isn’t so wonderful after all.

While descending the last pitch, the rope below me got tangled in the in-situ rope, blocking my safe descent. Locking off my descender, I was held on the rope, under the waterfall which was apparently carrying more flow than normal. All while my caving chums were 15m below me, leisurely taking photos of my descent. No matter how loud I shouted, they couldn’t hear me over the roar of the waterfall. Eventually they heard my pleas and untangled the ropes to allow my final descent. By the time I got off the rope, and regained my sense of humour, I was soaked through to the skin.

From the base of the fifth pitch, it is a long walk to the final sump, all of about 5m. Some serious effort has gone into making the sump a diver’s paradise, which has apparently been dye traced to the washing machine in DYO. A quick natter and some photos, we were off back up the pitches and out of the cave. Huw J led the way, then I followed, with Dave bringing up the rear. 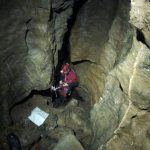 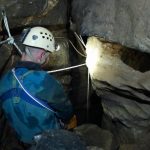 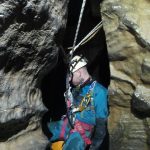 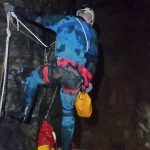 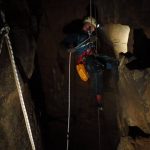 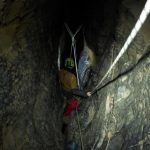 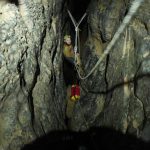 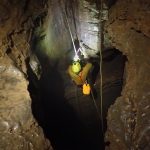 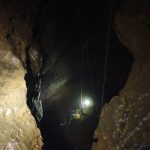 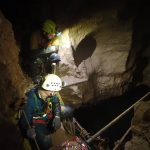 Huw Jones – Tom and Dave at the sump

Many profanities and a vow to list my SRT on eBay as soon as I got home, we were nearing the top of the pot. On the second pitch I had just about got my prussiking technique efficient enough to not be aching all over by the time I got to the top of the pitch.

The hardest part of the pot was still to come, the 3m climb out of the entrance over an awkward, greasy and polished slab. Using some moves that would make a contortionist jealous, along with an ample amount of profanities and I was back to the daylight. Followed soon after by Dave, accompanied with some more profanities and three bags of tackle. Finally, Huw soon joined us in the late afternoon haze. 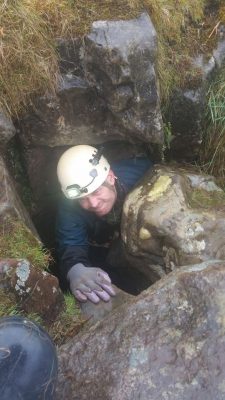 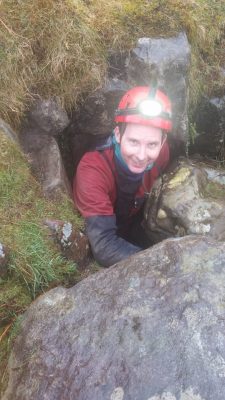 We were back to the cars and changed before we knew it. Ready to head our respective ways.

That night, I was unable to sleep. My whole body was still throbbing from the exertion. My mind was still racing with adrenaline, replaying every abseil, rebelay and deviation over and over all night.

I’d finally done it, a cave I had once sworn I would never, ever go into. I’d been to the bottom and out, and lived to tell the tale. I can’t wait to go back, and I certainly won’t be listing a ‘Full SRT kit, moderate usage’ on eBay. Not just yet, anyway…