We set out at 9:30 with three bags of rope, rigging gear and refreshments. It did not take too long to reach the pitch (at the far end of Indiana Highway), even though the two Huws went via Wonderbra, while Brendon and I took Beer Challenge. 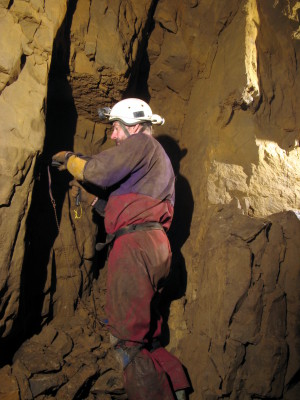 Malc placing a new spit for the second pitch

Huw Jones rigged The Lost Crusade pitch (22m) from existing spits, a Y hang over the pitch backed up to a wedged boulder. The rigging point is below the normal route, at the base of the rift and has plenty of space to change. Once over the lip of the pitch a deviation is needed to keep the rope away from the lip of what is the ceiling of a roughly rectangular chamber some 3 by 5 meters. Once Huw Jones was down and we were following, he had a look at one end where a steep slope provides a vantage point almost a quarter of the way up the far wall.

The opposite wall has a rift up some 3 meters of easily climbed rocks and after passing a narrow section, soon opens to a small chamber with a hole at about head height (the second pitch head), almost doubling back the way we came in. We hammered a in a new spit and rigged a ladder and a safety line to this and the existing spit. Huw assured us that he had been through the narrow gap and down the next pitch (5m), yet he failed to get through, just as my attempt was equally thwarted. After removing the ladder and line, we used the lump hammer and a small crowbar to widen the gap, succeeding in removing sufficient rock to make access somewhat easier next time. 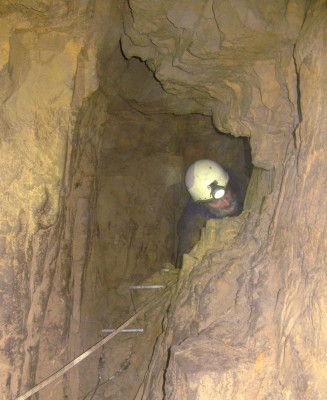 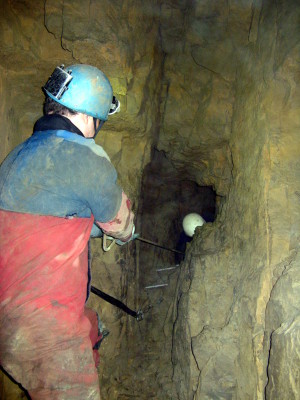 Malc receives assistance to get back out!

While we assailed the main pitch, Huw took a few pictures, although one of the flash guns misbehaved. After derigging we stashed a bag of rope and the rigging tools ready for a planned trip to investigate another pitch in the cave. The journey out was somewhat lighter and uneventful, getting out at 4:30. 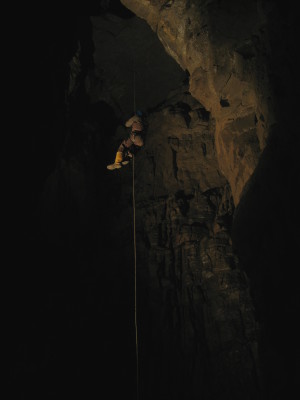