As we headed out from our trip when we finally dropped the Boulder Rodeo pitch in Fault Rifts, back in March 2016, I spotted a window, high up in the Eastern wall of the tall rift passage, at the southern end of Fault Chambers. It was above the top of a large boulder pile and I remembered that we’d spotted a window high up on this wall, when I’d first visited Fault Chambers back in 1994, on the day we first climbed up into and explored Fault Rifts. For some reason, the window wasn’t exactly as I’d remembered it from back then. I thought we’d finished with this area of the cave but now we were going to have to return, to see if the window led anywhere.

I returned with the two new tigers of the club, Tom and Dave. We’d decided to make an early start as Dave and myself both needed to be home by early evening. We’d arranged to meet at Pwll Du at 8am but a message from Tom said that neither his alarm clock nor his young son had managed to wake him and he was going to be late! When Tom arrived, we quickly got underground and headed to the climb, which took about two hours. We had a quick look around and Tom spotted a second window, in the same wall. This window was lower down but as it was above the base of a steep slope and the higher one above the top of the slope, the height of the climb to either was similar. A tube, visible in the roof of the lower window, looked to be heading towards the upper window so it was decided to try to reach the upper one as there was no way of knowing if the tube was passable. Also there was a ledge below the upper window, which looked like it could be reached by free climbing, to hopefully save time and bolts. I recognised the lower window as the one I’d seen back in 1994.

Being short on time, we got the kit sorted straight away and made a start. A bolt was placed for protection on the rising traverse to the ledge and Tom started the climb, with Dave life-lining. Unfortunately, when Tom got there, the rock above and around the ledge turned out to be so poor that it was almost funny! Tom came back down and we discussed options, whether to try for the lower window and hope there was a passable connection to the upper or to persevere where we were. It was decided to carry on above the first bolt, placed originally for protection, as the rock seemed to be more sound here. That could mean having to traverse across slightly, at a higher level though. 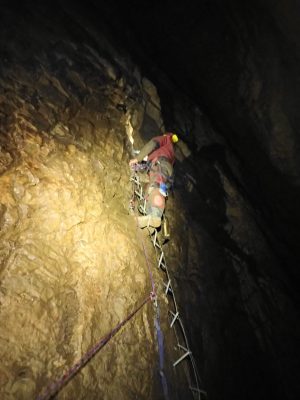 Huw on the climb – Photo Tom

I took over climbing duties, with Dave again life-lining and placed a few more bolts, gaining a view into the window. Unfortunately it wasn’t the start of a large passage going off but part of a small tube, which seems to be running diagonally down and parallel to the wall. The windows seem to be where the chamber has intersected the winding tube. There looked to be a part of the tube heading down towards the lower window and another part of it heading upwards. There are no windows visible higher up the wall so it needs checking out but unfortunately we had run out of time. I put a second stainless steel bolt in at the high point and rigged a length of rope directly to a couple of stainless ring hangers. Unfortunately we’d reached poor rock again so we’ll have to think carefully on how to proceed from here. 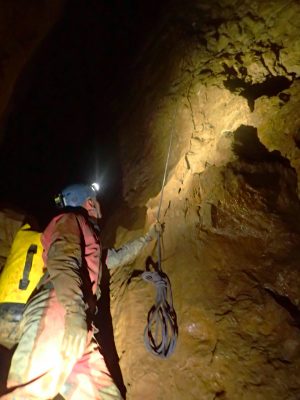