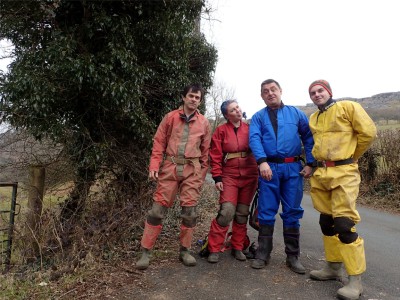 The Team in the Layby

We returned to OFD1 in much more settled weather to progress beyond The Step in the Main Streamway. An early(ish) start saw us at Penwyllt picking up the key for OFD1 and then back at the layby where we were confronted with our first obstacle, a large coach. Obligingly, the driver moved so we could park and we were changed, posed for a selfie and off down the hill to a now much dryer cave.

Rapid progress was made up Main Passage and along the usual route to The Step. The stream now was now very low and makes for a very pleasant trip through a very fine stream passage through black limestone passing over a few deep pots using the in situ scaffold bars. Moving upstream to The Sump we then continued to Lowe’s Chain that is a short climb up via the rope handline already in place into Lowe’s Passage.

Lowes passage is of impressive proportions until it suddenly closes down into a short scramble through boulders into Lowe’s Chamber. A climb up massive boulders was soon reached that took us up into the start of the Rawl Series, named from the initials of the original explorers. I had recently managed to shrink my undersuit on an unintended boil wash and so had bought some Asda thermals to wear but had worn a sweatshirt on top. By now I was starting to seriously overheat so a brief stop was made to allow me to divest myself of a layer. A few photos and we moved off into Roundabout Chamber with the pretty Bees’ Knees formations then into a bedding plane crawl, Roly Poly Passage. Soon after this, the Rawl Series takes on impressive proportions to become a truly large passage where you are scrambling over huge blocks that have fallen from the roof. What is not apparent is that the blocks are actually wedged across the passage halfway up and so the passage is actually of even more impressive size than it appears. It is possible to climb down at one point into The Subway that runs at the bottom of the actual passage until another climb up is found. We continued above the boulders until a scramble down to a narrow ledge at the side takes you past a deep pit where the Subway re-appears, then onwards into Pi Chamber. A number of passages lead off here but we dropped down between boulders in the floor into The Helter Skelter that becomes a short phreatic tube that we slid down until the end of the traverse wire is encountered. We could now hear the roar of the Main Streamway far below so clipped onto the wire and headed down to the Bolt Traverse. This starts off as a wide ledge but soon narrows until the footholds become more wishful thinking and you are glad of the wire for support. Such a high and exposed traverse was a bit of a first for Vicky and Tom but they both acquitted themselves admirably and we were soon at the end of the traverse and into Meander Passage.

Looking up to Airy Fairy

After crossing Bolt Traverse, we could have followed the escape route via The Dugout but had decided to continue with another traverse that can be reached by doubling back on yourself, Airy Fairy. This traverse is even more exposed than Bolt Traverse and at one point the footholds give out completely and you progress by bracing yourself off of the fixed wire; cows tails are a good idea here. Again Vicky and Tom coped very well and I think after this we should arrange an Upper Oxbow Series or OFDIII trip.

After Airy Fairy, it is possible to climb down to the Main Streamway which we did and while Vicky and Zeb moved off back downstream, Tom and I took a quick detour back upstream to have a look at Airy Fairy from below from where it doesn’t look nearly so bad.

So back to The Step (I think we should go via Pluto’s Bath next time) and back the way we came to the entrance ladder.

Another thoroughly enjoyable trip with everything you could want, from huge passages, beautiful and delicate formations to the adrenalin rush of an exposed traverse. In a word, awesome. I did manage to take a fair few photos and would have taken more if I hadn’t faced a small rebellion where I was threatened with having my camera removed from my possession. Oh well, maybe I’ll be able to get some more next time.