James had shown himself to be more than capable with his first trips and so Gareth and I decided to show him something different with a trip into North West Inlet in Craig a Ffynnon.

We arrived at the layby and quickly changed, as the midges were out in force and caver was definitely a favoured treat for them, and made our way to the entrance. The lock gave some minor problems as the bar refused to come through the small hole it rests in but this was soon sorted and we were in.

We were soon scrambling through the entrance series and James was suitably impressed. This was the first well decorated cave he’d visited and the formations that can be seen so soon after entering are had him in awe on several occasions. It’s easy to forget what these places are like when you first see them. 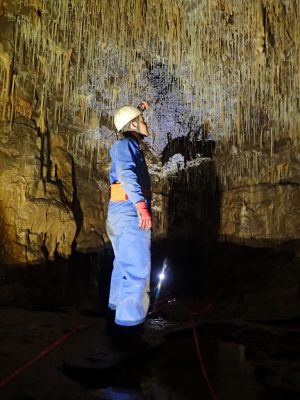 It is easy to become blasé and forget how special a lot of our caves are, it is only when you take someone who has not been exposed to what can be seen underground that you remember what it is that you are speeding past on your way to whatever objective you have for that trip. It is occasions like this that you get the opportunity to slow down and look around again and often it is with a renewed sense of wonder as you see things that you’ve missed before or re-see those things you always knew were there but for some reason have forgotten.

Philosophical musings aside, we made our way leisurely through the entrance series, up the ladder at the First Choke. 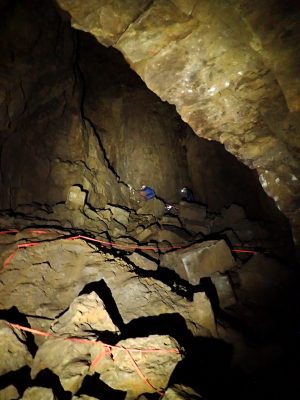 Here, in the first big chamber reached in the cave, James was keen to explore further so Gareth took him up the boulders to the further reaches of the chamber for a look.

It was then into the crawl in Gasoline Alley. Water levels were very low after the the recent dry spell and the pool at the end was passed with hardly a shudder.

Arriving at the entrance to NWI, the clear water looked very inviting but we first nipped up to show James the small attractive sump pool and the way on further into the cave with a promise that he’d be heading that way soon. It was then back to the blasted tunnel and into NWI. 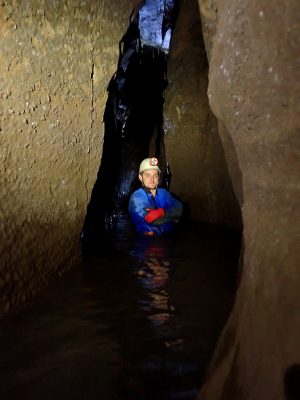 The water was as cold as ever, in fact I’m not sure that it really gets any warmer. Perhaps the perceived temperature is a relative thing. On a warm day, you will enter the cave already warmed up and will warm up more than usual if you enter on a cold day, and so, the water will feel colder than it really is. Whatever the temperature, I love this bit of passage. It always feels like this is more like the sort of caving that non-cavers think we experience all the time. Gareth was now enjoying himself even more and decided that the warm balmy waters were great for a swim so paddled up and down while I took a photo or two of James.

All good things come to an end though and we were soon getting stuck in the short section of sticky mud. And then more wonderment from Gareth and James at the increasing passage dimensions and the formations. James had been asking (tongue in cheek) when we’d see the plastic dinosaurs so it was a great surprise when he clambered over the boulder to be confronted with the Dragon formation. This needed a photo. 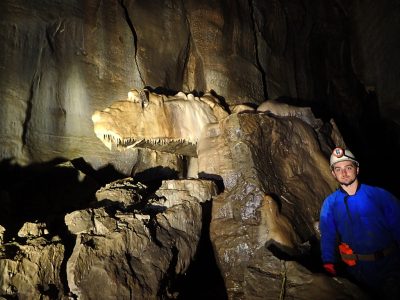 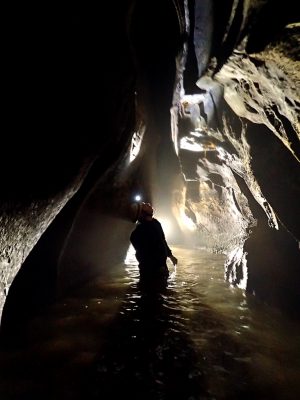 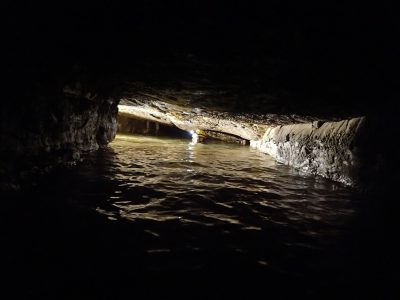 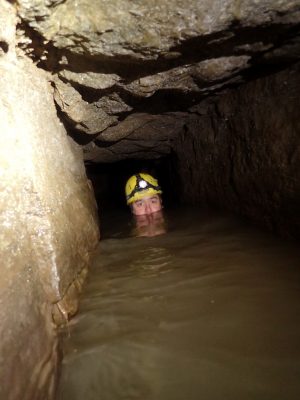 We’d soon seen all that NWI had to offer and, as we’d spent longer sightseeing than usual, we moved quite quickly back through the way we’d come and were soon back at the cars. Here the midges descended in great clouds on us, forcing us to change as quickly as possible, curtailing the usual chat about the trip.