All photos by Barry Burn, (apart from Gareth’s one)

A trip was needed, but a knackered knee, a dodgy ankle and recent overindulgence meant that it would have to be a nice gentle trip. With the recent long, dry spell, we also wanted to see what this translated to in a cave that is normally known for a streamway. Thus we settled on a nice easy trip into OFD1.

This was to be a first time into OFD for Terri and Lloyd and I always think that the Bottom Entrance for a pootle upstream with some diversions into the side series that can be found on the  way is an ideal introduction.

We met at Penwyllt at the reasonable time of 10:30 and after filling the a trip card, getting a key and a bit of a gossip we drove down the hill to the convenient layby to change.

Being in the middle of the hottest heatwave for over 40 years meant that the walk to the cave, although relatively short, was a sweaty affair. Opening the gate triggered a blast of cooling air that howled out of the cave and each of us took time to pause and enjoy the draft as we entered.

It was soon evident, as we headed up the passage, just how dry the cave was going to be as the artificial pools and steams were completely dry.

Before heading to the streamway, I decided to take everyone up Pearl Passage to Skeleton Chamber to tell the tale of the itinerant castrator and a quick look at Pearl Chamber at the end. 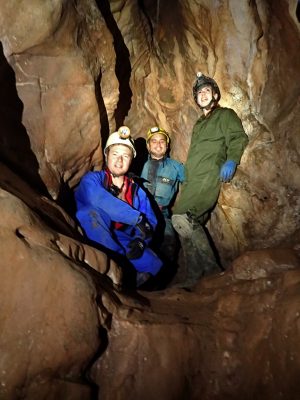 We were then soon back on the trade route with me pointing out places that usually have small waterfalls that were now completely dry. Approaching the climb up into Column Passage, it became apparent that this was a very different cave. 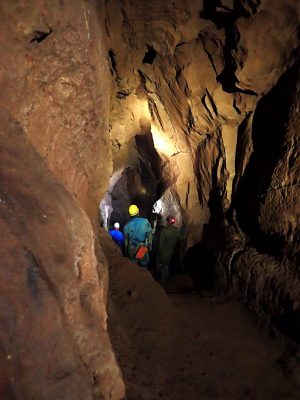 Normally the Main Streamway makes itself known well in advance by the gentle roaring that can be heard. Today, though there was silence. Dropping down from The Step, this was more of a Main Trickleway than the usual exciting streamway that is the norm.

The biggest surprise was the potholes that are passed by scaffold pole bridges. Usually the scaffold tubes are just above or under the water, but now they were a good foot or more above water. The water in them was also very still and clear, allowing you to see to the bottom of the potholes. Most surprising was the first pothole. Most usually assume that if you fall in, that you will be up to your neck. This time though, it could be seen that it is a good 20 feet or more deep. 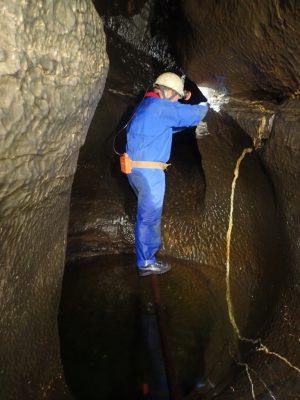 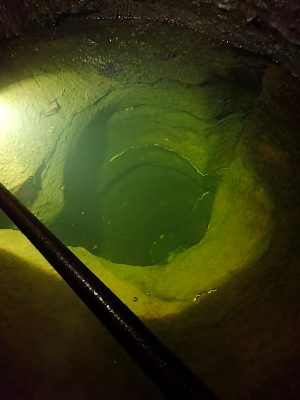 The plan was to head up to Boulder Chamber and then head back. We took our time heading upstream having a quick look around and pausing to have a good look at various features. The sump was particularly low with an airspace to be seen although we didn’t fancy getting too wet for a closer look. At Boulder Chamber, we spent some time for a quick break with a nose around and some tales of how long it took for a dry connection to be made. 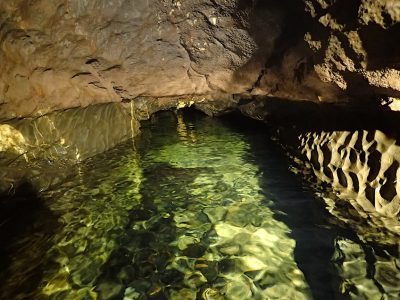 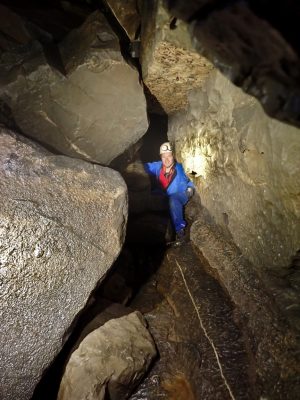 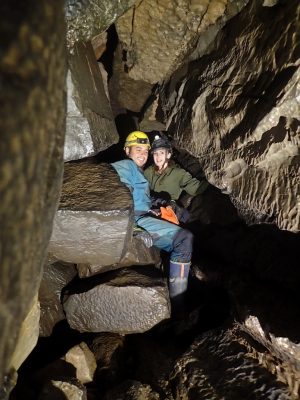 Gareth and Terri in the Choke 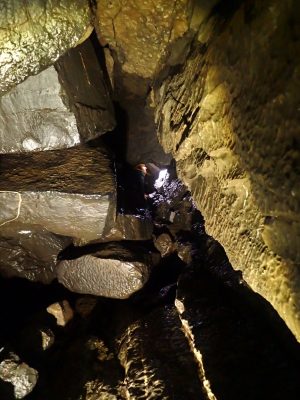 Heading back downstream, a quick look at the traverse up to the Waterfall Series 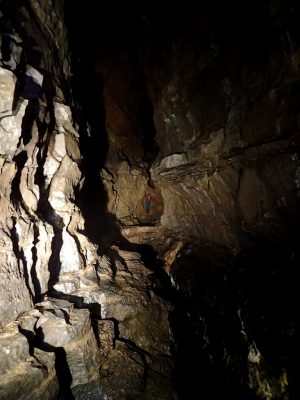 with a promise to come back to that another day and then we climbed up into Low’s Passage. Gareth was convinced that he could see further leads high in the roof but I explained how Pete Harvey, one of the original discoverers, had spent a lot of time maypoling up to such suggestions only to be disappointed each time. The drop back down Low’s Chain (now Low’s Ladder) was accomplished with varying degrees of finesse before we headed of downstream again with the intention of looking into the Railton-Wild Series. However, we managed to stomp right past the way into this series, so again, it shall have to wait for another day. climb up the Maypole Chain for a look and then we went straight past The Step for the initiation ceremony that is Pluto’s Bath. Before heading up from the Streamway to it though, I nipped down to have a look at what the downstream end was looking like. 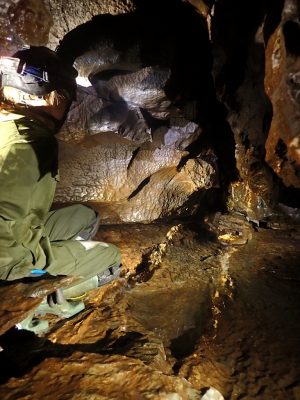 Terri Looking at a Missing Sump

Terri and Gareth followed on and it was surprising to see that there was very little water now and a definite absence of a sump. A couple of photos and we headed back to join the others that were waiting for us the other side of Pluto’s Bath. After the correct amount of laughing at Terri trying to cross the pot and Gareth, who’d been chuffed to traverse over it, getting pushed back into it, we popped into the Fault Series that is one of those little visited gems that are to be found in OFD. Again, this had me confused as the climb up into it is always a lot higher than I remember. 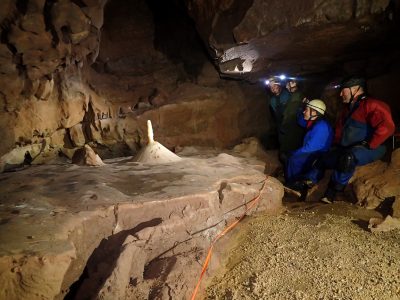 Sniggering at a Formation 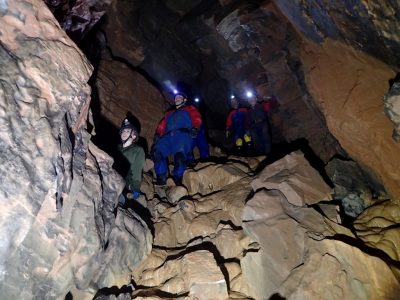 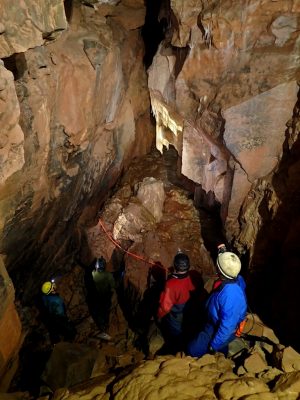 Descending from The Fault Series

We were soon back out into the sunshine and heat, pausing on the way to rescue a small frog. We decided that he may be trying to escape the scorching heat but was unlikely to survive for long so Lloyd was the hero that carried him up into the outside air to hop free.

I do wish that I’d thought of having a quick look at Gothic Sump before we headed out, it would have been interesting to see how low it has gone in the drought conditions. I also wonder if anyone has undertaken to document the system in these conditions. It may happen again next year, but chances are we won’t see such low water for another few decades and perhaps we should be more proactive in taking some measurements and recording observations.

After changing, dropping the key off and a good gossip with the DO who was intrigued with our descriptions and some of the photos, we did what should be done after a good trip into OFD, a pint in the Ancient.