So the nice weather finally appears in Wales and guess what – a cave sounded a better option than a beer garden. With that in mind myself, Bethan, Tom, Jenny and Cheryl Headed to the North West Inlet of Craig a Ffynnon.

We had our usual layby change which is currently situated at the side of a busy road due to the A465 dualing project and we were soon off to the delights of my favourite cave. Tom Williams and Huw Jones tagged along as they were heading to the Promised land and one by one we crawled through the gate and into the first chamber where the log book is stored. After a quick sign in and a quick chat about the conservation and photography of bats we began our journey.

After the first stooping walk, where you’ll find a thermometer monitoring the caves temperature, you’ll enter the second chamber which is beautifully decorated with formations covering every inch of rock. Following on from that is a wide passage with a stream running down it and after a small scramble through this, we were up into the “Chamber of Straws.” As most of you will already know, this is the first of an endless list of breathtaking sights you will witness on your travels in here. 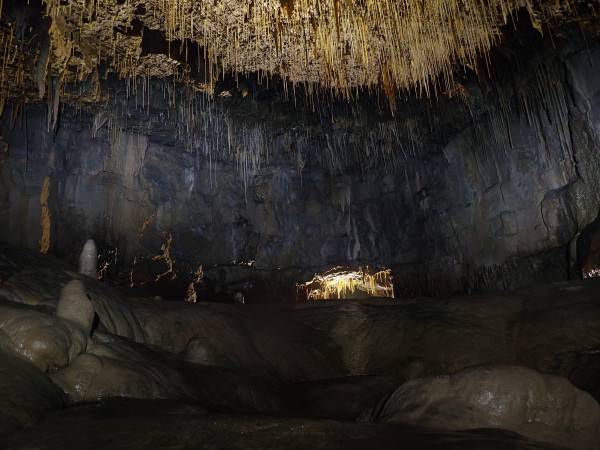 With a lot of oooos and ahhhs from our new recruits Jenny and Cheryl, we headed down the phreatic passage that leads to the first boulder choke. In this passage from time to time you can see the water marks up to at least 8 feet! Craig has been known to flood to the roof at this point which is why it’s suggested you do not venture in in bad weather for fear of being cut off, or worse.

The first boulder choke is somewhat simple but wet. The stream that you hear running from the first chamber is what is falling from this choke. A 12ft damp ladder climb up brings you to the scaffolding which results in a bit of handy work to enter the chamber above where Gasoline Alley begins. Gasoline Alley is the first of many crawls that this cave has to offer and is also an eye opener for anyone who is visiting as at elbow depth it can take your breath away with the sheer iciness of the water. It is usually at this point that I warn a group that the best, and coldest, is yet to come. The Alley is finely decorated with straws and the shingle stooped walk between the 2 wet crawls is somewhat beach like; yet not sunny and sadly no ice cream.

After you exit Gasoline Alley a short easy walk will bring you to the junction of NWI or HOTMK. Here I usually use the squeeze at the bottom of the pitch as a taster of tight spaces. Jen and Cheryl were keen to pop it through and take a look at the pitch so with that we shot through and explained where the pitch leads and what they would see if they got to the top. A quick gathering of thoughts and a wave to Tom and Huw who were at the top of the pitch and we were off back through the rabbit hole to the junction. Jen and Cheryl really weren’t looking that thrilled to see a somewhat small tunnel cut into the rock so I was keen to get straight in and show them the size of the wet passage before we continued with our trip. Cold is really not the word when you enter the water. Caving becomes a stupid idea, a hot shower is the best thought you’ve ever had and the language becomes extremely colourful however after a quick dunk you soon climatise to the conditions and off you walk/swim/hop to the delights of NWI. In all honestly the wet passage really doesn’t have anything overly exciting to offer you. There are a few formations high up in the rock above but the passage you are traveling through is out of this world and you really begin to understand how caves were formed when you can see how water has shaped the earth below your feet. Be warned though there are some large rocks under the water which you will usually miss until you fall over them or stand on top to lower yourself back in and get a dunking when you realise that there is a few extra inches the other side. After the water there is some mud… proper mud. Not the type you find in the garden. This mud is thick, stains and you can guarantee someone will get stuck.

My first trip here resulted in being dug out of the mud by Zeb while I flapped around like a wet fish trying to get to the other side. Some boulder hopping later you and will reach “The Dragon” She is a beauty! She sits there guarding her nest keeping visitors at bay. Not much further on you and will reach the end of the passage. There are magnificent straw displays to both sides and a muddy climb up to the dig where you will find the railway line. Yes – a railway line that was used to transport rocks and rubble out from a dig to be put down the slope. The sheer amount of rock that has been removed from the dig is outstanding. 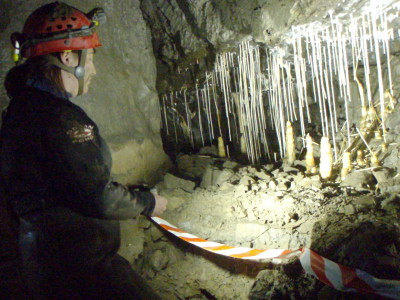 Straws at the end of NWI

We headed back out of the cave at a much quicker speed than we entered and into the outstanding weather we left behind. Jenny even got to see her bat!!